Brunswick Defense - 333 Harbor Boulevard • Costa Mesa, CA 92626 - One of my earlier contracts was with Brunswick Defense. Yes, the people that make bowling balls and boats, had a weapons division in Costa Mesa, California that used to make weapons systems for the government. I worked on two systems there. In both cases, I was writing Quality Control and Quality Assurance software. Basically, I started controlling all sorts of Lab Equipment that did pressure or temperature tests or plotted graphs and so on. So I wasn't even out of high school, and I was working on these two weapons systems.

The way I got this job was a couple of guys came into Compusound Computers while I was there. I greeted them and said what were they interested in? They replied they wanted to know of a Commodore Pet could drive some test equipment. I asked if the test equipment had an HP IEEE-488 GPIB bus, and when they said "yes", I replied, "sure". Then I made my pitch, "Why don't you bring the equipement in, and if I can't get it working in 20 minutes, you're out nothing. But if I can get it working, then you buy a computer from me, and hire me for a contracting gig". They said, "sure", and if it worked, they'd buy 2 computers from me, and give me a fat contract.

About 45 minutes later they came back. I plugged it in, and within 5 minutes, I had the thermistor registering different temperatures in one probe (another was pressure). They bought the computers on the spot and wanted to hire me as of tomorrow.

I agreed to a few hours a day, but could we postpone hiring until the following Monday? They were fine with that but asked "why?" I explained they were in Costa Mesa (and I was in Orange) -- that was too long for the bus... and I was taking my driver's license test on Saturday. (I was just turning 16). They were a little stunned at how young I was, but shrugged, and went sure -- and I was doing aerospace consulting 2 days after I could drive. 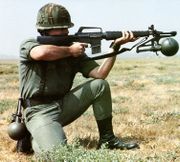 They ran an ad in military magazines titled, "Bowling for Bunkers". One was this little sphere about the size of a small grapefruit that you slapped on to the front of an M-16 rifle. When you fired the next round, it ignited the rockets in the sphere, which spun the sphere, cut it off the housing, and sent it on its merry way, until it burned through the bunker, troop transport, building, or whatever got in its way:

I'd made my own pyrotechnics with model rockets or my own mixtures, and my own payload, this was just the next step in cool. Better than that, I had all these M-16's lying around the lab for test mounting; which I used to break down and put together, and do other things that teenagers shouldn't. Did you know that taking apart the trigger mechanism of an M-16 (or the A-2), back in the 1980s, was classified and against the law? They didn't prosecute me; but if they didn't want me to take it apart, then they shouldn't have left it where I could get to it. I took everything apart and put most things back together too. This was before "The Way Things Work" series of books.

Also along with the list of things not to do with an M-16: if you stick one in the hands of an 18-year-old in ROTC's Rifle Marksmanship, and tell him not to put it on full-auto, chances are it is going to slip at least once to the 'A' position. You'll know this by the "tat-tat-tat" noise, the shit-eating grin... and the target that looks like a stream of bullets when through it, rising and pitching to the left. It takes quite a few pushups to wipe that grin off.

The other weapon system they had there, was even cooler: it was called the pav-tac, or something like that. Basically, it was about 12 feet long, and 3' across and a ballistic rocket assisted bomb dispenser. It was smart and programmable, and it was launched by attack aircraft and would line itself up, and fly right down a runway. As it was following the runway, these longitudinally mounted mini-rockets would shoot out the bottom of the thing, downward, into the runway; where they would burrow under the runway, and blow up. One of these was a serious hazard to an entire airport and had something like 48 of these little missile/bombs inside of it. Nobody makes toys like the military.

Getting to see these things work as a kid was awesome. Most of the actual testing on this stuff was boring technical documenting, and testing these things over and over again on mundane stuff like dropping and measuring deformation, and plotting things while it's in an environmental chamber and so on. I just did what they told me -- but made some neat graphs of whatever type they wanted.

One of the more disturbing things was working in the test lab, working on my program, and from behind me I'd hear; "BANG, Bang, bang, tap". I'd turn around, and one of the lab workers was doing drop tests of the little grapefruit-of-death thing off a large ladder; just to see how much they dented when they hit, or what force they hit with at certain speeds, and so on. I felt like his job was the same as Bugs Bunny in "Forward March Hare"; smacking shells and then labeling them "live" or "dud". Of course, the dud's this guy was dropping were not live; but it was still disturbing; especially because I was in the same lab, and not completely convinced that he wasn't going to accidentally test a live one someday.

The job was fun, and I was only there like 6 months. Since then they closed the plant and converted it to an extension of South Coast Plaza (a shopping mall complex). They would have kept me forever, I think. They were paying me dirt by Military consultant standards. But I was having a blast learning and consulting. I'd work 6 months or a year, do a bunch of stuff, and move on.

Anyways, the point is that I had a good time in some of these Aerospace contracts. The stories you tell, the experiences you make. It was an interesting era when computers were still new, the money was good, the industry was desperate for people, and the projects were any sick and twisted things that people could dream up. Since then the industry matured and went through a contraction phase. But a lot of my aerospace experience still makes me think back to 1980 and Brunswick Defense.