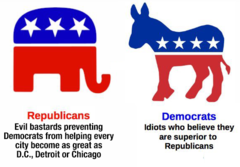 The above truism doesn't mean Republicans are always right, or Democrats are always wrong. Or that Republicans don't have problems of their own. It's just that in this topic, as long as one of the beliefs of the Democrats is in their own moral superiority (whether intellectual, emotional, or cultural), despite all the evidence to the contrary, the other side has all the evidence they need to conclude "the other side" just aren't as smart as they think they are. (Which is pretty easy to be right on, since there's few humans in history that could ever live up to the left's confidence in their own self worth).

But arrogance doesn't make one right or wrong, it just changes how others might see you. And of course there's a few areas where the roles reverse (like abortion), with the exact same outcome. Once one side stakes out "the moral high ground" the other side must assume the other side is stupid. 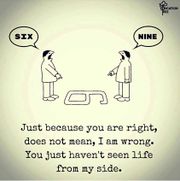 An outraged Democrat complained that a Republican told her, "liberals don't love our country". And that was her justification for frustration on Republicans. How could they think that?

Again, that's not attacking any individual, but it is pointing out a problem with the group message (and what they're sending).

I have weekly debates with folks. And while I know a handful of moderate liberals that can have sincere discussions and admit some of that. These are more the exception than the norm. Far more common is the person so impassioned by what they think is right, that they can rationalizing attacking others, not considering their points (waiving them off as "Faux News Watchers"), exaggerating every problem, denying any successes by those people or means they don't like. Then wonder why the other side sees them as "hating America" and traditions?

So I don't think that Liberals hate the country... I just think they're like the abusive Parent in the allegory above. They want to help, they just want to tell people what to do, even more. They are often blind to how they come across, or how the other side might internalize their actions (or why). But I know most are honestly trying to improve the country and do the best they can. And Republicans propagating, "They hate America", is one of those cases where they assume the moral high ground, and thus the other side (which knows better), assumes the Republicans must be stupid.

But what about Conservatives?

I could say some very similar/but different things about conservatives. But a lot of that brings us back to the start and perceptions.

The majority of impassioned and frank discussions with the left, from my side (sort of a moderate libertarian'ish view), often gets them to claim I hate the poor, or am just greedy, self deluded and so on. And when I share what I've done in my past, to try to convince them otherwise, they get mad (they think it's about one-upsmanship or "winning" an argument, instead of trying to get them to understand that it's not black and white). Good people can disagree on how to solve things. Or even on priorities of what should be solved first.

Again, that's not impugning ALL liberals. I'm just sharing what the average conservative, libertarian or not-quite-liberal enough person gets from the liberal orthodoxy (the larger general tone).

If only we could see two reasonable people discuss various tradeoffs and experiences on TV or in the news. But it seems drama and polarization gets better ratings. And as long as both sides mimic their most strident voices, and make no efforts to coexist with the other side, we'll continue to get more polarized.