George Ciccariello-Maher is a Drexel University Associate Professor of Politics and Global Studies. He’s also a far left, self described radical and communist enthusiast who supports Venezuela, Occupy and other marxist movements. He made a dumb tweet that read, “All I want for Christmas is White Genocide”. And followed up with claims that it was a good thing in Haiti, then tried the defense of (a) ‘relax, I was just mocking a figment of the alt-right and white supremacists imagination’ or (b) that he only meant exterminating alt-righters (that sub-group of whites). As if that made the statements OK?

This article does a pretty good recap: http://beta.hotair.com/archives/2016/12/26/about-that-white-genocide-tweet-by-a-drexel-professor/

I'm not sure anyone should be fired for one dumb tweet (firm slap on the wrist, and taking their twitter account away, maybe). Tweeting is supposed to be allowed for what people feel in the moment. But lying about it and claiming it was sarcastic/ironic doesn't help the case. It was sincere enough that it got a follow up. Just own that it was too complex an argument to try to make on Twitter, and move on. I don’t mind professors making stupid statements, but I do mind stupid professors getting caught being stupid and denying it. There’s a difference.

And his points that there has never been a white genocide, that Alt-Right and White Supremacists are the same thing, that they “invented” this concept, and other inanities in his defense of his tweet doesn’t help his case and hints strongly that he’s a lousy Political History professor (no sense of nuance and balance). And discounting the points, or mocking them, instead of decimating the oppositions points with facts, shows he's not a good thinker or teacher. He’s too much a revisionist and activist to belong in a University.

He mentions Haiti (which was a minor gennoacide of white elites), but I'm thinking Russia, the British behavior during the Irish potato famine, Germany’s Final Solution (if you consider the Jews white, which I think universities do for quotas), native Americans certainly tried in some massacres (and vise versa, to more effect), let's not pretend we're Turks and forget the Armenians. And while I disagree with the alt-right on many things (especially in degrees, and their racism to combat racism stance, is as offensive to me as the left's)... but their complaints that the Boer racial attacks and driving out hundreds of thousands of whites through terror (or directly killing thousands?) is a form of genocide, may have some merit and not be complete fiction.

And the alt-right's point that Islam (or catholic or mormons) attitudes towards out-breeding other religions to displace them (as well as other open borders policies that might do the same based on race) is also somewhat valid. They do want to do that. Those reacting to that slow motion "white gennoacide", through breeding and political correctness destroying their history and values, certainly exists — and the professor says that doesn't exist, is either ignorant or a polemic and neither bodes well. That doesn’t mean we need to overreact, but denial is just dumb. Thinkers don’t shout down arguments with, “you’re just an ignorant conspiracy-theory inventing racist”, especially when the other side isn’t ignorant (even if they’re wrong), and they didn’t invent the concept/terms which long predate them.

The seeds of some of murdering whites for race/beliefs (real white genocide) goes back to 1930’s, or 1840’s, or more. The newer out-breeding “white genocide” goes back to religious texts that encourage outbreeding others (hundreds or thousands of years), but certainly to David Lane (circa 1980’s), which traces it’s roots to Germany and Mein Camp, and back to the progressive movements of the turn of the century. Prominent progressives were warning of this stuff, from Margaret Sanger or George Bernard Shaw. And that goes back to the Eugenics movements and William Goodell (mid 1800’s).

Being offensive doesn't mean you're wrong

Now the alt-right might be completely offensive jerks about it, and some of their extremist solutions like anti-miscegenation laws can be downright disgusting to my beliefs (ways of thinking), and I lean towards mixing of cultures and races being a good thing (as I'm a product of that). But intellectuals don't deny facts or ignore the other sides arguments, or at least they didn't before the safe-space generation. Saying that there isn't such a thing as black or brown supremacists, or that whites have never been persecuted or attempts to be eradicated because of color, religion, culture... or denying that many tribes believe in outbreeding and diluting away their competition, is not intellectualism, it's denial. And denying uncomfortable truths (and not being able to address their points) just empowers the other side.

So my problem isn't with the professors tweet because it was insensitive and racist (it was both, even if meant ironically, which it wasn't, so his defense is likely a lie). My problem is that it was stupid and dismissive and in denial of basic uncomfortable realities, and that would empower the other side, and make both sides dumber and more polarized by reading it.

My response is the opposite. Sure as white western values spread, they're going to be diluted, and so are the others. The trick isn't to deny the mixing weakens the purity of both, it is to embrace the reality that we can consciously pick the best from both (and throw out the worst attribute of them as well), and end up with something better than either. Like Reece's Peanut Butter cups, or any recipe that tastes better than the source ingredients alone. 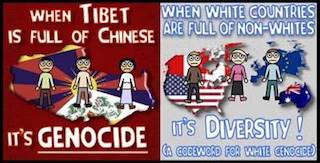 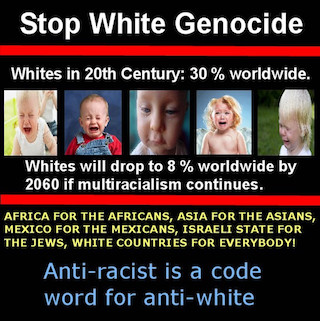