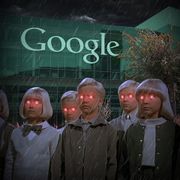 Give academic college snowflakes more money than some governments, and tell them that they were the smartest kids in the room (like their mommies did), and they might believe you. And their obscene success means they skip a lot of life's harder lessons, and the wisdom that usually imparts. They get to invent a culture based on a College Kids idealism and naiveté, with unexpected (for them) results.

Sloganeering and their own "in" lingo, hiring and work practices that they thought skimmed the very best, was actually a filter against intellectual diversity, and seems more in home in Jonestown, Guyana than in Silicon Valley. Even their unofficial motto, "Don't be Evil", begs the question, "what is Evil?" -- and to them it was a college marxists view of the world to hate everything they were going to become. So in order to be a good employee you had to put your corporations evolving ethics above your own, or you left (or were driven out). And the stock growth was enough to keep most people in place, becoming more evil, while seeing everyone that disagreed with them as outsiders (and thus Evil). They became their parents.

They thought they were the smartest kids in the room because they stumbled onto an idea at the right time (and everyone was telling them how great they are). Steve Jobs and Bill Gates had the same thing happen a decade or two earlier. They failed at the hardest life lesson of all, never believe your own bullshit.

So Google founded as a cult of arrogance, that was incompetently run and had no focus in all these areas (for at least the first decade):

Google was a frat house. But they had money and momentum. Since they were immature college kids with little real life experience, they were able to run their company in ways that would appeal to immature college kids with no real work experience. Which is what they did. They mocked experience and celebrated youth. They expected you live, breathe, and think like a Googler (their immature naming for members of the clique). They invented lingo, and processes, in ways that cult does. Many people that didn't know better, or wanted to belong joined the cult because "fit".... many others that did know, just plugged their noses at it, because "stock" (or security). But since they thought they were better than everyone else, it was just a matter of time, before their arrogance would catch up to them. It didn't take long until they weren't the coolest kids in the Valley. Now many of their best and brightest leave in disgust (or are driven out), as they put conformity above contribution.