NAAO: Keep it in the family 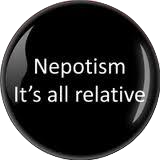 My mother was a placement person with a technical consulting company; and was tired of me working for the competition, or going direct. It was time to work for her company. You'd think that working for your Mom would work in your favor; and for some I'm sure it does, for me it was nothing but torture.

Getting jobs through her company was tougher than elsewhere because people assumed I was just getting the interview (or job) because of her, and not on my own merits; and they'd ignore my previous experience. Then I had to work harder than anyone else to be taken seriously. And while ordinary bosses try to motivate you, just what I didn't need was a patronizing Mom riding me because my performance reflected on her ego.

Then on the Consulting agency side, I'd try to negotiate my salary with her company and she'd sit in on the meetings. I'd be professional and state based on what I'd been making before and what others were making with my experience, I deserved "X"; and my Mom would interrupt the negotiations saying, "You don't need that much, you're only 19, and you're only spend it on Computers, Stereo's and CD's anyways". Gee, thanks Mom. Later I'd try to negotiate a raise based on performance, and she'd comment on the latest thing I'd bought, or trip I'd taken, and berate me for being greedy. It might work for others, but it only worked against me. At least I wasn't coddled with the "can do no wrong" syndrome.

However, her company was getting good contracts, and in general it was easier to work through an agency due to legal and tax issues. There were more than a few times that I almost walked and went back to work for other agencies; but I learned to stick it out, and learned a lot by sticking it out.

If the difficulty of having to work harder to be taken seriously, and being under-compensated based on experience wasn't enough; there was the whole humiliation factor. I was young (teenager), sensitive to the age discrimination stuff and lack of a degree, and most consultants were resented because they made more than employees. (Employees seldom did the math on all the costs to be a consultant, but that's another article). In order to be taken seriously I tended to over-compensate and be very quiet, professional and reserved. (I didn't want that loud-mouthed teenaged know-it-all impetuousness to work against me). My Mom is the loud, brash, extrovert aggressive saleswoman type.

One day, I'm working at NAAO, being my professional self, working away minding my own business, when my Mom walks in. She was talking to some of the executives about the contracts (there were like 10 consultants placed there), and so on. Having your Mom walk to your desk, call you sweetie in her loud voice, and kiss you in front of your peers is mortifying. I'm surprised she didn't spit on a nappy, and wipe the lipstick off my face when she was done, just to finish my humiliation. It's bad enough people knowing about it, but seeing it was worse. Damage done, she went off to her meeting, while I tried to crawl under my desk and die.

Of course that was invite to my peers to harass me mercilessly about "Mommy", when I was not at an age or maturity to handle it well. I covered by laughing and playing along; but heck it was traumatic for me back then.

Then after lunch, I was slowly recovering my dignity when I hear, "Hi Son". And look up and it is my Dad. I'm thinking, "what is this, grand central station or a goddamn family reunion?" My Dad was an executive with Rational; and Rockwell was buying some ADA systems from them. We talked for a few; but I was sure this was a conspiracy to try to shred any hope of dignity and respect I had earned.

Of course they either both meant well, or they were getting me back for being a bratty child. Parents know that calling kids by their pet names in front of peers, or treating them like, well, children, is about the worse humility and indignity that they can suffer. We get older, and learn that things can get much worse; but at the time, it is dreadful.

The team members of course thought it was great, and used to walk by and mimic my Mom or Dads greetings just to see my head snap up with that look on my face.

After my pleading with my parents to never to acknowledge my existence in public again, we came to an agreement; they'd do what they wanted and ignore my over-sensitivity, and I'd just have to learn to cope. I was old enough that I got over it pretty quick, and I got better over time. But I also decided that I could play the embarrassment game; a quick comment here about some embarrassment moment from my Mother or Fathers past in front of others, and they got far more reasonable and sensitive about my feelings. We all decided a truce was in order; and started to respect each other's professionalism.

There was an occasion or two that was priceless. Like when one person said, "You're not related to that pushy bitch are you?" And I replied, "Why yes, that's my Mom. That's why people around here refer to me as, 'that son-of-a-bitch'".

I have no idea what he was thinking to say that, and I wasn't offended at all, but seeing the look on his face was totally worth it. He had understood 1 + 1, but just hadn't done the math. He had also tasted foot for an audience that had at first winced at what he'd said, but was hysterical after my retort.

Another of the more amusing events was when we were all out at an after work event with lots of people from work. This one girl that was a tag-along, was inspired by either my dashing looks and personality, or one too many beers, and she started flirting or outright hitting on me. I was being coy not because I'm that daft or shy, but because my parents are there. She'd come in late and didn't know that, and I'm trying to figure out how I'm going to casually point this out in conversation; but we were all loosened up and sitting around telling jokes. So she says to me, in her outdoor voice so that others can hear the joke; "Do you know the difference between eating pussy and eating a hamburger is". I'm thinking, this is a pretty subtle signal, but I answer, "No". And she says, "Would you like to come over to my place for a burger". The joke was a little racier than what had been being told at the table before, but people were laughing pretty hard; some of it with her, a lot of it at her or me (knowing the situation).

They were just recovering when I said, "Hi, I'd like you to meet my parents. This is my Father to my left, he's one of our suppliers, and that's my Mother across the table, she's the account rep for the consulting agency that is sponsoring this", they both smiled and waved. Her chances of ever making a good first impression on them had just flown out the window, which she realized as the look of horror crossed her face. I stood up, held out my hand, and said, "Now let's go get that burger". As I was walking a stunned girl towards the front, just for a chat I assure you, she excused herself to go to the bathroom; and I never saw her again. I have images of her crawling out the window, or running through the kitchen.

After she ran off (literally), I went back to the table, and my parents said, "Where'd your friend go" (my Dad muttering something that most didn't hear about, "the one who could suck-start a Harley"). I replied, "Do you have any idea how hard it is to score with your Mom and Dad as Chaperones?" Once again the table roared their approval at the family show.

While it was fun occasionally bumping into my parents, or embarrassing others; in most ways I don't miss it at all. While I have met some that work in a family owned business because they are too incompetent to work anywhere else; I've met many that were good but were in a difficult situation, trying to separate their family and professional lives. Given the choice, I prefer to keep the two far apart.