There’s this common meme that the U.S. is so much worse than the U.K. in murders or crime, so I wanted to collect a lot of facts in one place. 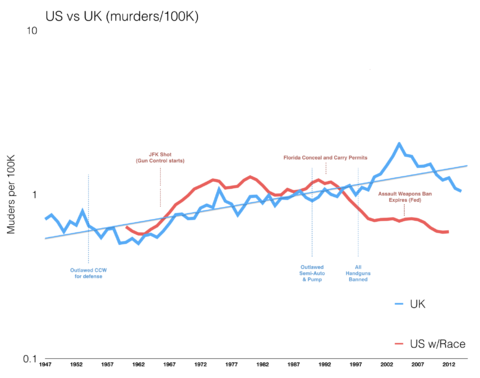 Here’s a simple adjusted plot of the murder rates over time, for the U.S. (using the FBI’s UCR / Universal Crime Report) and U.K. (using their ONS / Office of National Statistics). And I overlay when they each enacted or removed gun controls. What you notice is: 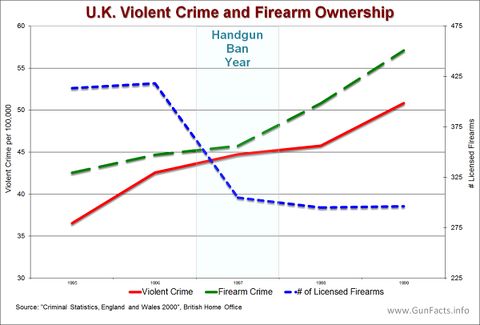 Regardless of whether the UK has fewer murders than the US for cultural reasons, we know that gun control didn’t help the UK or US's murder rate. And in fact, seemed to have the opposite effect. Enacting them seemed to increase murders, and removing those allowed downward murder rates to continue.

The upper graph is the corrected/adjusted numbers, the slide to the right is the raw data, with each adjustments: honest people show and explain their work. The media usually gives uncorrected numbers, or doesn't show their work, to intentionally mislead people.

Something important to know is that the U.K. ONS distorts their numbers for political reasons. While the rest of the world measures murder rates as people who are killed, the ONS does two things to cheat:

When propagandists compare the “official” U.S. to U.K. numbers, they’re ignoring these differences in accounting. But to be honest, we need to normalize (correct) across countries accounting. I could either raise UK’s numbers up, or the U.S. numbers down, but you have to make up for the gimmick (where an uncharged homicide isn’t counted in the U.K.). So I corrected the U.S. down (the US with UK accounting), and you get the medium red trend line. The U.S. is not equal to UK or England, but is much better than Scotland or North Ireland with their gun control.

The other gimmick used, is whenever you compare two different collections in statistics, you must correct for differences between sub-groups. (Or only focus on the sub-group).

In the U.S. Blacks are 1/7th the population, but over 1/2 of all our murders, and Latino’s are about the same 15% of the population and are responsible for over half the rest of murders.England has virtually no blacks or latino’s (<3%). So if we correct for those demographic differences (or just compare a subset — the U.S.’s white murder rate to the UK’s white murder rate), we find that in the bright red trend line, that the U.S. has a lower murder rate than the U.K.

So facts are facts. In the U.S. we have a lower white murder rate (but higher black murder rate) than the U.K. And white’s in America have higher gun ownership rates than blacks (or than whites in the U.K.) — so we know that gun control doesn’t help murder rates for whites. At least across these two countries. And the reason for differences among blacks in the two countries is easily explained by gang culture in the U.S.

But what about violent crime?

Well at least they don’t have our mass murders

Mass murder rates are hard to track because they’re so rare. With 5x the population of the UK, we had about 8x as many events as the UK (so a little worse in rate). But the U.S. usually has fewer kills per incident, and that’s if you go only go back to 2008 and their Cumbria shooting (where Derrick Bird shot and killed 12 and injured 11). If you go back to 2005 and their London bombings their 52 dead and 700 injured, they easily surpasses all ours in the same time (not even adjusting for population).

So because these events are so infrequent, it matters a lot when you start and how you account. I could easily cook the numbers and make them look far worse. Or you could throw look at only mass shootings (counting 2 people as "mass") and make us look worse. The facts are that gun control has virtually no impact on mass murders, as mass murderers get guns anyways (as France and Germany proved), or they use cars/trucks and explosives (which do even more damage). But that's a topic for another article.

Anyone vaguely informed on gun control issues knows is that the U.S. does not have a gun problem.

Another thing gun-controller advocates either don’t realize (or do, and lie about) is as bad as the U.S. is at murders or violent crime -- the UK is worse despite their gun control. England alone has something like 600 murdersby knife per year (and 26,370 knife crimes). Compare that to only 1,500 for the U.S., with over 5 times the population. Home invasion robberies, aggravated assault, violent rape, and stabbings are worse in the UK than in the U.S. And that's BEFORE you correct for race and gang crimes.

So in the end, when it comes to trends:

Anyone that tells you otherwise is trying to prestidigitate the numbers, and baffle you with bullshit and fallacies -- not explain the numbers and show their work, as I just did.