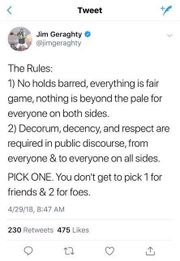 American Progressives ruin everything. The White House Correspondents Dinner started as a self-contragulatory celebration of the White House media's accomplishments and misses over the prior year. With the media and comedians being willing to barb both sides and self-deprecate. As the media became more biased and partisan, it devolved into a dinner where they roast and mock Republicans/Conservatives and fawn over Democrats/Liberals, no matter who is in office. Yes, they'll throw a token barb against Democrats for something superficial, like Obama's ears or golf, then celebrate how wonderful his mediocre speech is (then claim how gracious he was in the face of overwhelming praise and adoration)... while they'll throw vicious barbs and lies at conservatives, FoxNews, WSJ or anyone that takes offense at their partisan vitriol.

For the same reason Mel Brooks and Louis Farrakhan aren't equally funny when telling Jewish Jokes, the WHCD is not longer something that's equally funny to both sides. It's become a media mean-girl clique where they get to lie to conservatives face, and expects them to grin and bear it. Why would any conservative subject themselves to people that openly despise them? Knowing that if they take offense to any of it, they'll be pilloried for their lack of humor? Whether it's fully dead, or just dying quickly, it's not something people who value fairness or balance should waste their time on. 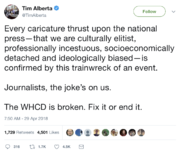 This was not supposed to be a roast, the Gridiron was for that - and it is closed to cameras for a reason.

Just to give you a flavor of how progressives ruined it:

Even the Correspondents dinner President had to admit that Michelle Wolf was not in the spirit of the event.... but while he regrets he, he doesn't apologize, and it won't change anything.

I don't know if it'll go away or not. I do know that I will think less of any Republican that bothers to subject themselves to that. And I'll think less of any Democrat or Media Wonk (same thing), that goes for masturbatory praise with maybe a light barb or two to keep up appearances. Either way, if it isn't beneath them, then they're already in the gutter. And as Tim Alberta said, it just proved all the worst things about the media, and they either need to get their heads on straight, or get out of the game.

Ever since the end of the ironically named "Fairness Doctrine", where government decided what was fair on the radio, and it's demise meant that we got Conservative Talk Radio: which went over the facts, and started laying out how dishonest the mainstream media was (and was only telling half of the story), the media's been having problems. This magnified with the start of the Internet, 10,000 free fact checkers criticizing their hypocrisy and errors, kept exposing how biased the media was. Instead of learning restraint, and growing in quality, they got more and more shrill. Last night was an opportunity for them to prove all their informed naysayers and the President wrong. They could be the bigger man, they could be honest, sincere, non-partisan, humorous, and make fun of themselves. Or they could prove their opposition and the President right, that they are hateful and ignorant dicks. They chose the latter path, and now they reap the rewards as the trust in the media, already in the gutter, gets to continue its decline.