Abortion is a deeply personal view, and I used to explore people by asking or sharing my views on it and seeing how they respond.I often did the same with all the taboo subjects: sex, drugs, religion -- anything that's personal and invoked passion will let you learn how intellectual/emotional a person is, and hint at how extreme they are, by what positions they take and how they deal with conflicting views. It's a shortcut to getting to know them. But the flip side, is you also may learn to avoid people who are otherwise decent people -- as there are people that are moderate/reasonable/rational, except for one or two outlier/hot-button issues. And this is often the hottest, and might be an outlier.

This article covers many aspects of the topic, in what I hope is a somewhat neutral and informed way, though I openly have and express my opinions. The point is not to change anyone's mind, and I leave people room for their own personal views. Though I have far less tolerance for the furthest extremes on either side, and less tolerance for bullies who show less tolerance towards others views. I don't like never or always answers type answers, and I like bullies who lower the conversation less. And I find more bullies in the extremes, especially if they think they're in the majority, and more so when they're trying to force-feed their "one true" view on the entire rest of the nation.

Toastmasters
I did a video of a toastmasters speech (2008-2009) on my views on Abortion, which sums up my views that I started researching and forming my views in the late 1970's which annoyed my feminist English or Social Studies teachers. I wrote editorials in the 80's, and I have researched and reflected on my views ever since. This article covers that video and more. The goal is not to attack other people's views, but to share information for those who want to understand the issue deeper.
Pro Life/Choice 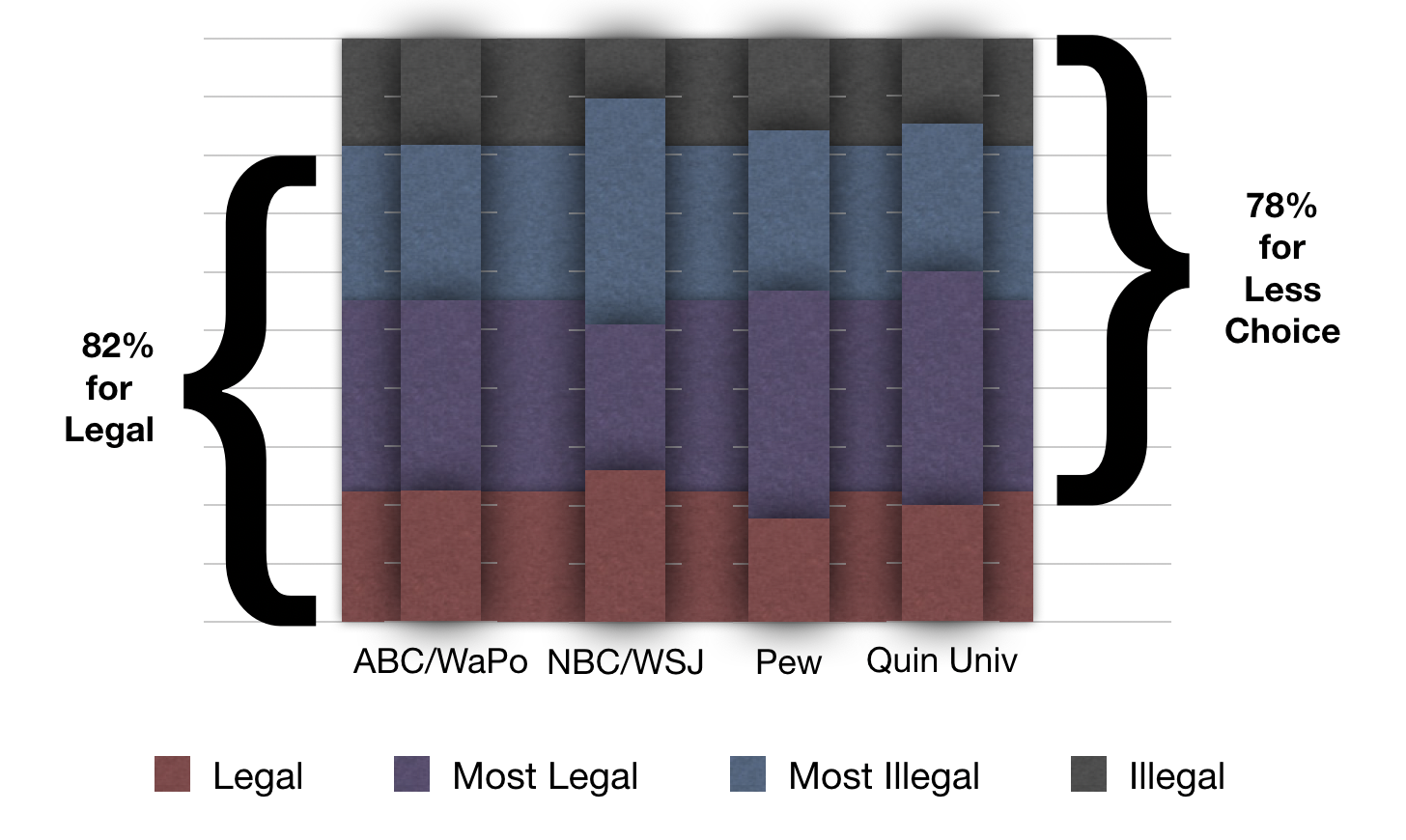 Whatever poll you use, it has been fairly consistent, that the majority of Americans are both for and against abortion. Both sides will tell you that ≈80% of people support their position, and both are telling the truth.... just not the whole truth. The way this works is that the polls ask if you want abortion legal, illegal, or mostly legal/illegal -- and then both sides stack everything but the opposite extreme in their camp. The whole truth is that the majority of Americans want abortion legal: and want more restriction than we currently have.[1]
by Party 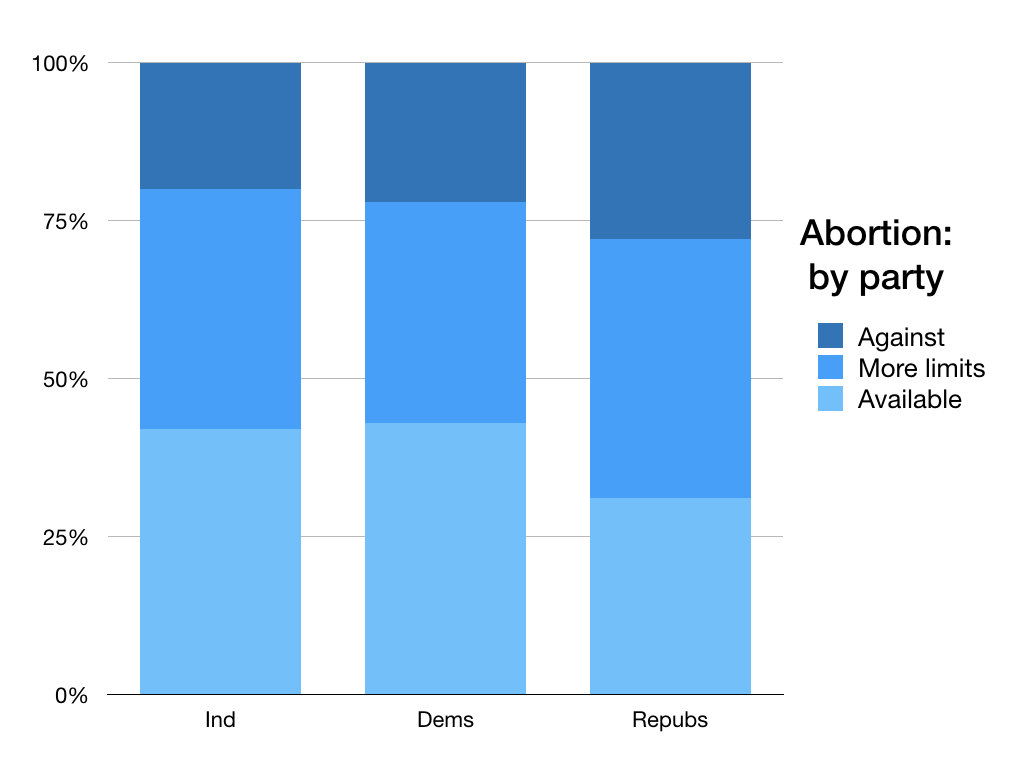 General support/opposition for abortion is nearly the same across parties. However, since pro-abortion fanatics fund the DNC (and media), and their positions would shock and horrify the public, they need to distract and pretend that the other side would ban all abortions. While the RNC might include a few more restriction, there's nowhere near the support for anything close to a ban. While the DNC has supported things like: no parental notification if your pre-teen daughter is molested and gets one, forcing government and religious institutions to pay for them, 3rd trimester abortions, and even allowing the murder of full term babies accidentally born alive.
by Term 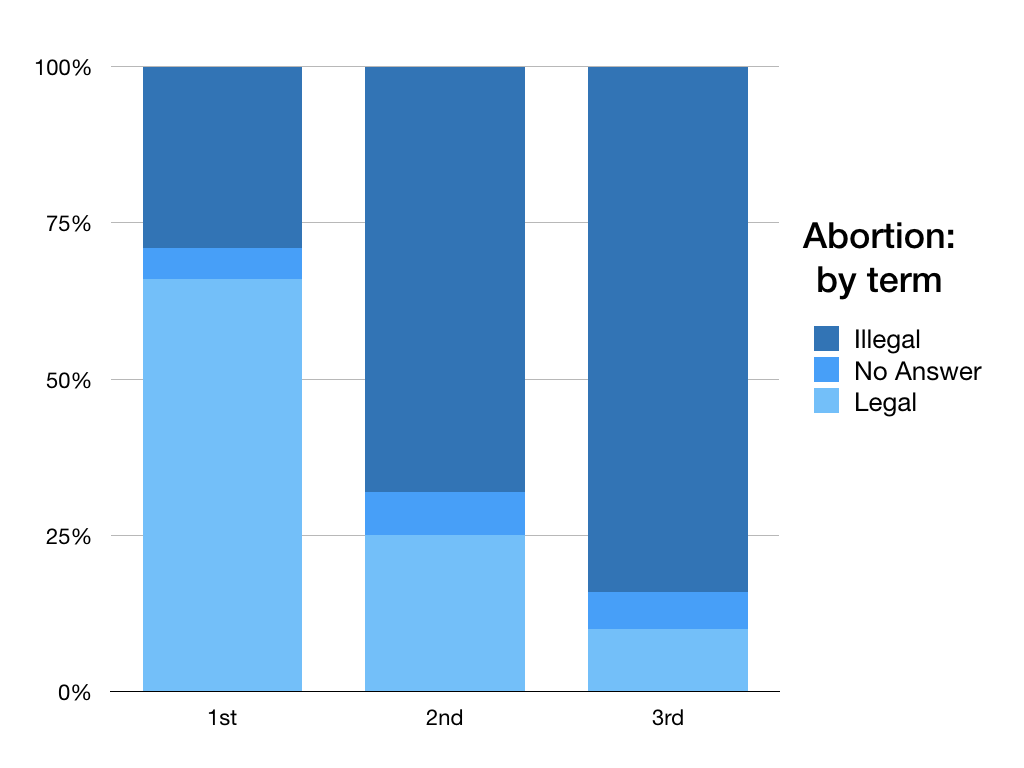 The vast majority of Americans want more restrictions. That is, if they understand what the current restrictions (or lack of them) are. While democrats and their media have done a great job of duping people into thinking the choice is all or nothing, the truth is the opposite of slippery-slope: banning 3rd trimester abortions does not increase the odds of banning 1st trimester ones -- it reduces pressure and funding for anti-abortion groups which can build momentum on the horrors or 3rd trimester abortions. Removing that takes away their most gruesome pictures. Abortion is less a fight in Europe, because most of Europe has far more limits than the U.S.
per Year 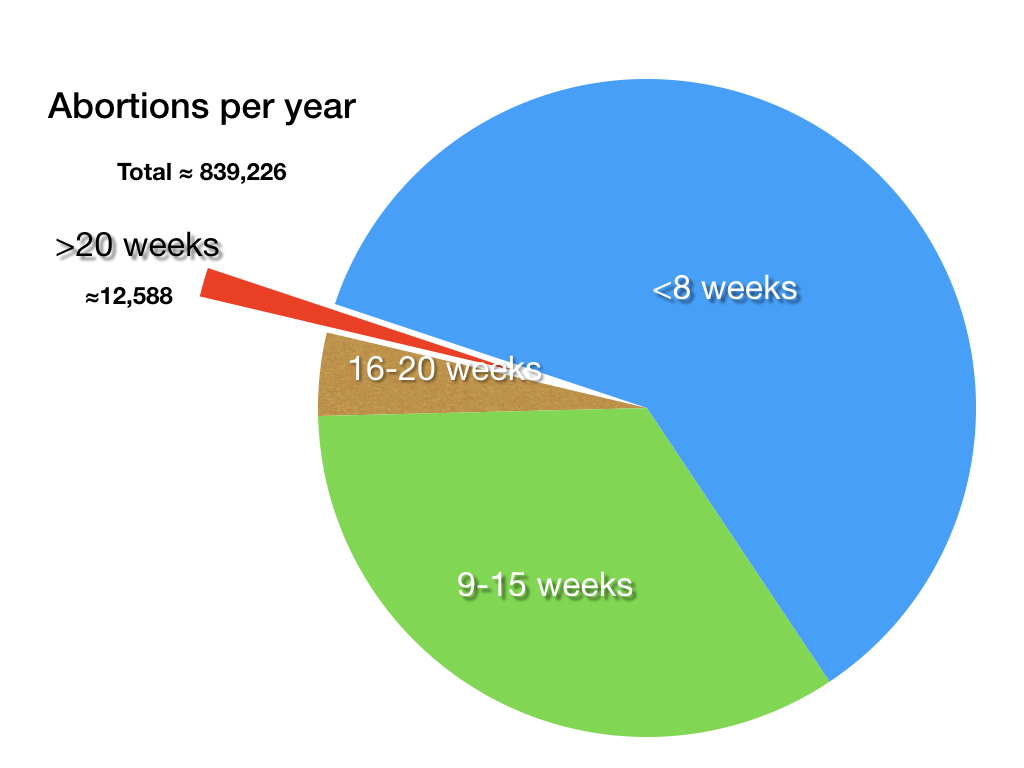 The scale of abortion is sickening: ≈800K per year, or twice as many American deaths as WWII. Late term abortions (defined as >20 weeks) runs about 12K per year, or roughly twice as many American deaths as Afghanistan and Iraq wars combined. 25% of all Women will have one: 44% of them will have two, and half of those will be on a third or greater. These don't count over-the-counter abortifacients, like the "Day After" pill. Too many women are using abortion as birth control.
Ethnicity 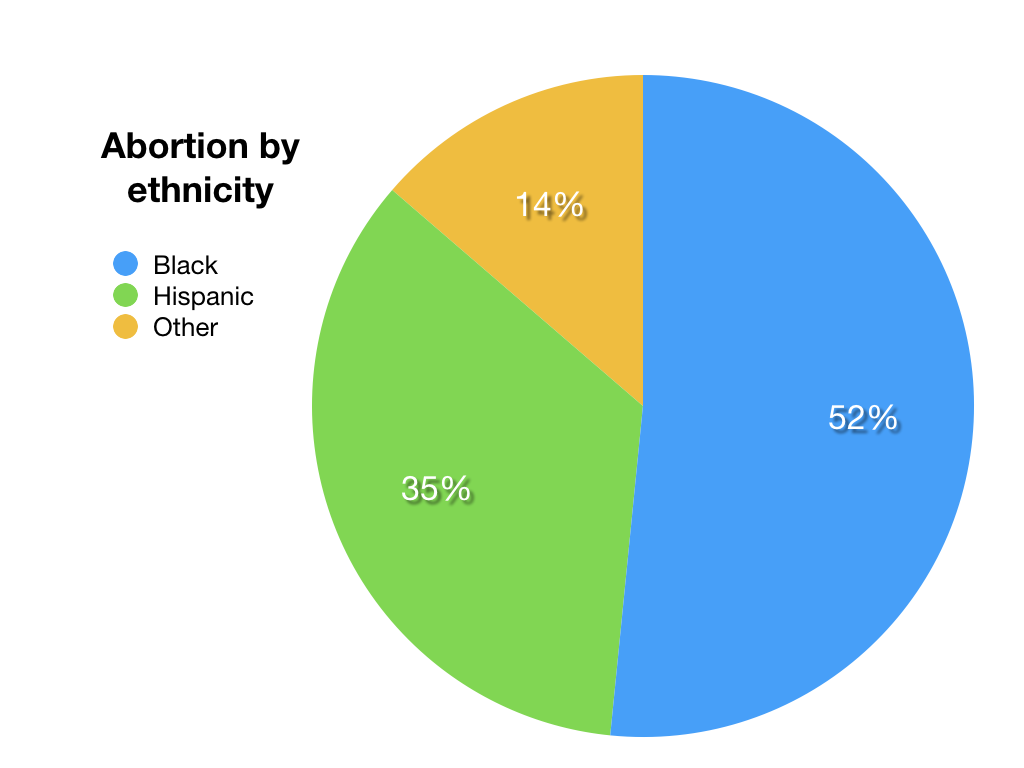 Margaret Sanger founded planned parenthood on the idea of exterminating inferior brown babies, so they'd stop outbreeding white ones. And when you look at abortion statistics by race, the numbers show her eugenics in actions, with 87% of babies being black or latino alone. And remember that's under half the population having nearly 90% of the abortions. I find it interesting that the left pretends to be the ally of the minorities that it is helping to selectively exterminate.
Why? 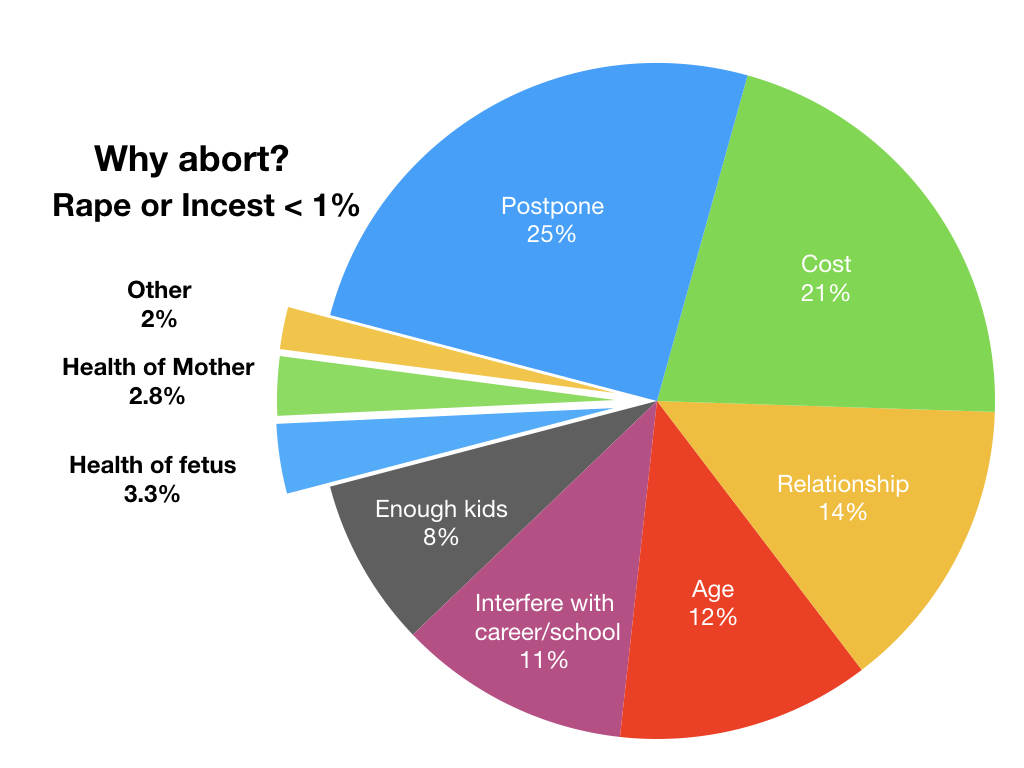 While the abortion advocates will try to convince you that we need abortions for Health of Mother (2.8%), Health of Fetus (3.3%), or rape/incest (>1%), those are not what most abortions are done for (<6%). That means about 19 out of 20 abortions are just done for convenience: they could easily give the child up for adoption. That doesn't make convenience wrong, or mean I want to micro-manage their decision: but the whole "medical necessity" or "rape/incest" canards are a fraud -- we could keep it legal in those cases, and that would eliminate 94% of abortions.
Why late term? 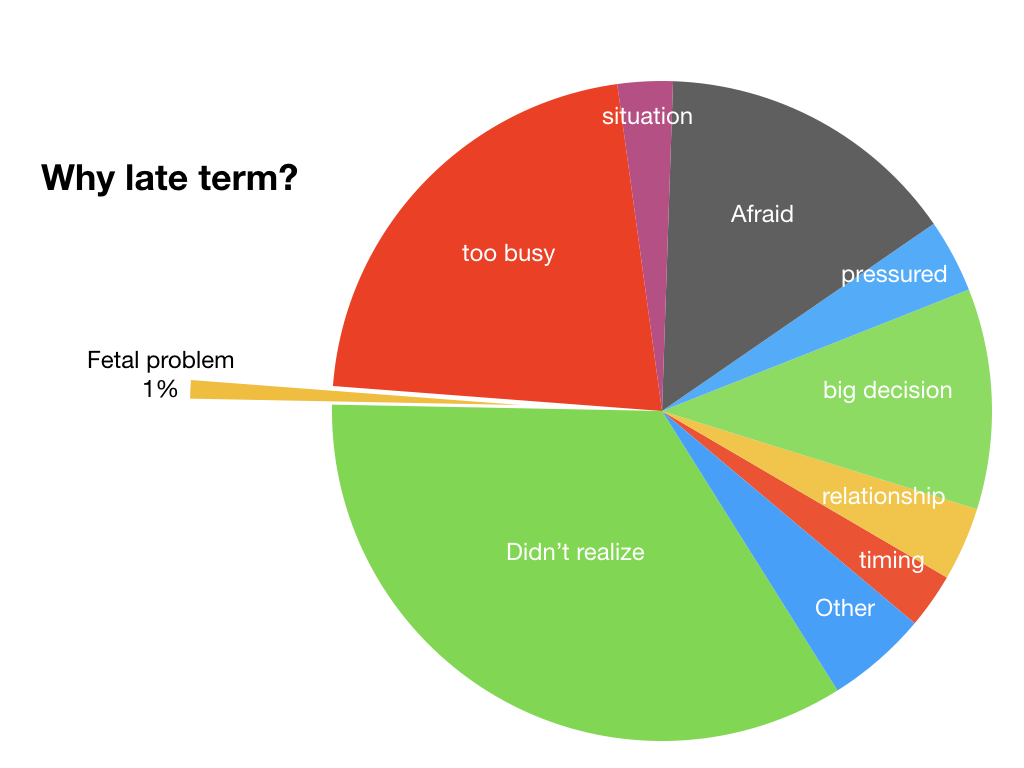 Late term abortions are even worse. Again people will claim "fetal problems" or "health of the mother", but both are barely a blip (≈1%). The other 99% are just variations of "didn't know" until you were in the 7th month, or was afraid and so on. I support a right to choose before 20 weeks -- but if you've let the baby grow to where it has a beating heart, brain waves, and is viable (or on the cusp), then you're not forcing a mother to have a baby at that point -- she's going to have to birth it either way. (This isn't a small clump of cells any more). The only question is whether you'll suck it's brains out, before pulling it out one piece at a time.

With those stats/facts in mind, remember which side is the extremists in the abortion discussion: 6 items

Anyone that calls me an extremist or pro-lifer is a liar, polemic or moron. My position align with most Americans in that I'm pro-choice in the first trimester, and I'm pro-life at viability (with a little padding). I'm even more pro-choice than my wife and many Americans in that I'm fine with abortions up to about 20 weeks. While the extremes are at conception and birth, most people start considering a baby a human being with something else like 3 weeks (when the heart starts beating), 6 weeks (brain activity), 8 weeks (quickening and the baby starts moving around), 10 weeks (when the baby can do coordinated moves like hiccup, stretch, yawn, suck, swallow, grasp, and thumb-suck), or 12-14 weeks (when they start having memory and not startling at repeated noises).

Where a lot of people get confused is they assume because you are against a bad ruling (Roe v. Wade) they think that means you're against the cause. I like the Roe v. Wade framework, even though the Supreme Court had no authority to make it. It was a later/worse decision (Planned Parenthood v. Casey) that undermined Roe and allowed so much doctors discretion and terminations up to 24 weeks, and it's so poorly enforced, that virtually thousands of viable babies were born live and crying, and killed because of doctors discretion. Some like Kermit Gosnell were sent to prison for extending the rules beyond those limits, but only after 30 years of cover-ups. So I can be both pro-choice, and against judicial activism and the genocide of viable full-term babies, and think Roe was a bad ruling, and Casey was worse. It's called having a personal position and not being willing to give up your integrity to "win" or support it. If the Democrats tried that more often, I'd still vote with them.