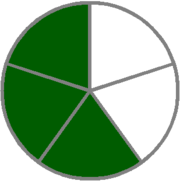 You often hear about the 3/5ths claus; "Blacks were only 3/5ths of a human being". But think this through. What happened is we were negotiating how to get rid of slavery and create a system where Congressional votes were based on population. If the South's population included slaves (5/5ths), they'd have much more influence, and it would be harder to eliminate slavery -- so the North got a compromise that slaves only counted as 3/5ths of a person (for purposes of congressional representation) in order to reduce the influence of the South/Southern States would had in congress.

Many that use 3/5ths claus in the Constitution to claim we are founded on slavery. They are getting it backwards: we inherited that from the British Empire and Spaniards and French before us -- what the 3/5th claus shows is that we were trying to grow out of it, from our very founding, and how the founding fathers tried to diminished the influence of slavery on population based representation. They were putting it on a track towards extinction and trying to wait it out. If the Constitution didn't compromise to weaken it, the South would have created their own country and Slavery would have been strengthened. Context matters.