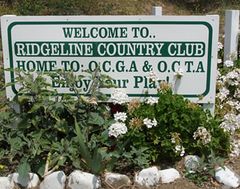 Ridgeline Country Club - 1051 Meads Ave • Orange, California 92869 - All parents have issues, mine were into status ("things"), working, and social events: yuppies a few years before the term was invented. I have social anxiety, but I'm not into status symbols (much). But I do value the independence that working got me, and I started working at a young age. I remember washing cars, selling lemonade, mowing lawns, and my first real non-summer job was being food prep, bus-boy, dish-kid, and various odd jobs (like collecting the balls from the driving range, and so on) at the local country club (at 12 or 13).

While "Country Club" sounds very posh, Ridgeline was a little pitch and putt (with a few par 4's), that added a few tennis courts and a pool later, and was out past the burbs, and not exactly Pebble Beach. Still, I'd learned to golf as a kid, and one of the perks was free green fees; and my boss, Skippy, was a Presidential Chef. Which means at least once he cooked a meal for President Gerald Ford.

Skippy was a hoot, and could make a sailor blush. Certainly a 13-year-old kid was no match. And by today's standards, he'd be locked up for political incorrectness. I still remember that asked for my lunch sandwich dry (no mayo), and he said, "Yeah, after the first time I jerked off, I could never eat mayo on my sandwiches again"; for some reason, that image scarred me for life -- and to this day mayo, which was already distasteful to me, still brings this image up and remains low on my list of edibles.

I'd worked the food counter all during Junior High School before - but that was just basically pushing pre-made snacks and lunches across the counter and counting change. This was the closest to fast-food that I got; but after hearing all my friends horror stories, and about the disgusting things they did, I'm not sorry that I missed those experience. Plus I'd come in and help friends close and clean occasionally, or stuff like that; so I got a little by proxy. The best benefit from working at Ridgeline (besides free golf), is Skippy would cook "Baron of Beef" for Sunday Brunch, which had an entire femur, and we made sandwiches from the leftovers for a few days (that were awesome), then I'd take the bone home and give the remains to my dog, who was in heaven gnawing on something bigger than his head.

After working at Ridgeline, I seemed to get the movie Caddy-Shack much more than my contemporaries. I still have flashbacks of Bill Murray, that I confuse with my memory; was that the movie, or was that real? We used to night golf, midnight swim (in the ponds), or do other strange things.

I remember when I used to hunt on the golf course after dusk; mostly rabbit with a pellet pistol I had. For some reason, they love golf courses. But I remember this one time, I'd shot (wounded this rabbit) that was scrambling off and jumped over a row of bushes. I was chasing it and it jumped over the row of bushes. I had jumped over the bushes chasing it. It had jumped into a cactus patch, so I had to. Rabbits are immune to the needles. Humans are not. It had its last act of defiance.

I'd made it a good 6' into the patch, and it took a while to get out. When I got out, I picked hundreds or thousands of needles out of myself. I'd had to take off my pants. I couldn't put them back on, because they were full of needles. So I walked the mile home without my pants. I also learned that when you get quills in you, if you don't get them all out, some of them will go completely through. They'll keep working their way through your body, until they get dissolved (most), or come out the other side (a few). It was weird getting these needles popping out for what seemed like weeks or months.

The job only lasted like 6 months or so; which is a lifetime to a teen. But it was a good experience, and I was imprinted by the experience. One of the best things, and worst things, about working is the people you work with. The other bits of wisdom were that meat slicers do what they say, industrial dishwashers get hot, and working at a country club sometimes means good take-home food that's about to go to scrap.