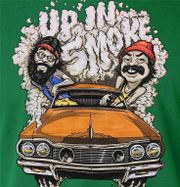 The second time I was hit by a car, I was doing something stupid. A friend had "borrowed" his mom's car. He wasn't exactly of legal age, but my reasoning about driving with idiots was "hey, it's their problem if they get arrested". Apparently kids can't quite fully rationalize all the potential things that can go wrong; or at least I didn't.

Well he came over, and said, "let's go do something". Something turned out to be to drive down to my creek (about 1 1/2 miles away), and smoke a bowl of pot. I was not exactly a stoner kid; but from 14 to 16, I knew a few stoners and hung out with them enough to get wasted on at least a monthly basis. After that, I cut it way back to about every few months at a party or something, until my early to mid 20's where I either used one hit for insomnia for a while, then stopped completely.

Well, we did the things that bored teens do, which was something sophisticated like getting baked, and then throwing rocks into a stream while being totally fascinated with the splash, and trying to remember the way home; which was a mile and a half back on a street that had to go by my house. I never drove drunk or stoned. I wasn't afraid of hitting anything, it was more that I didn't want to get a ticket or lose my license. But like many kids who aren't doing real math, I'd ride with friends who were blotto'd because anything that happened was their problem and not mine. This is more proof that some teenage synapses aren't firing right.

Anyways, my friend pulled in front of my house in his mom's big 1970's station wagon (this was the 70's after all), and I got out of the car. I was talking to him (through the back seat door, which was still open), as he was letting the car roll forward when I felt the car rolling up my leg, and he saw my go down and heard a yelp.

The rear tire started rolling up my ankle (sideways), which very effectively, pulled me down into the asphalt. The car was rolling up my leg towards the knee, when the tire slipped off my shin. He stopped, and I popped up.

He said something brilliant like, "Dude, did I just run you over?"

I replied with something more brilliant like, "No, I was just kissing the asphalt and squealing like a little girl for the fun and dignity of it".

Talk about harshing my buzz; that had sobered me up in about 0.5 seconds flat -- endorphines and pain are serious sober-uppers.

The nosy neighbor (Mrs. Jones actually), was across the street and looking over, and about to figure out that something "interesting" had just happened... and tell my Mom and the whole neighborhood about it. So I told him that he should just drive home and act cool. I turned, waved to Mrs. Jones, and walked into the house, with as little limp and cursing as I could muster.

She was probably sure that something significant had happened, but just not sure exacly what.

Fortunately, my leg was flat against the asphalt when the car had run it over, so it didn't break - but those old land-yachts weigh a ton; actually, more than a couple tons. I got inside and iced my leg; it was purple at the knee and ankle and rather swollen where the tire had run up it, and I don't bruise easily at all. I had to get tweezers and pick road gravel from out of my ankle, where just the weight of the car had pushed it into my skin. And then I hobbled around for days, with some lame excuse about twisting my ankle doing something stupid, to avoid admitting the truth of getting run-over doing something stupid.

The moral to that story was that when you're not alert, the law of averages is going to sneak up on you. And never rely on your friends, because they are probably less alert and even more stupid than you are.