Ford Aerospace - Jamboree Road at Ford Road • Newport Beach, California - The whole defense industry was interesting and hysterical at the time, and there are so many stories to tell about these weapons systems. You work around and swap companies, or are swapping people with other companies; so it was a whole subculture. But the programming of this stuff was insanely funny, in the way that non-life-or-death software can never be. Software and people can be so amusing when they aren't meaning to be.

Improved Vulcan Air Defense) system. Basically, this is a Vulcan machine Gatling-gun, on a tank track, with a radar system on top to be used as an anti-missile or anti-aircraft defense. The development goes something like this: 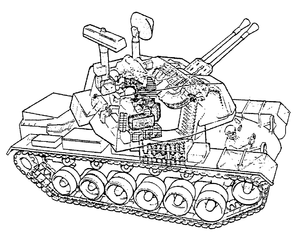 The last of the Ford Aerospace stories was about how you put a different gun (a 40mm bofors anti-aircraft gun), on an upgraded track and radar, and made it anti-Helicopter - since jets can reach out and touch someone from much further away. So you program it to look for a flashing radar signature (like a helicopter rotor) and leverage your design a while longer. You test it a few times, to make sure it works, but it's basically just upgraded, so everything should work fine, right?

Remember, the ammo these babies are going through is in the many tens of thousands of dollars worth, or more, on each of these tests. These are expensive life lessons; much more amusing when they are other people's money than when they are your own. Trouble is that I'm paying for it, out of each of my checks (in taxes). Experiences like this let you know how limited a sense of humor of some generals have, especially if you can't stop laughing. 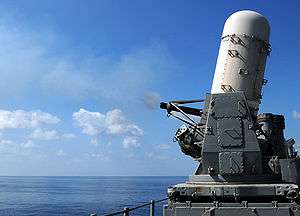 Common sense would make you think the Army and Air force and Navy and Marines are all militaries, so they share knowledge and experiences. With the exception of the Marines and Navy, a little, you'd be wrong. In the 1980s, they were all developing similar systems, completely separately from one another. So when the Navy created their Phalanx (Ship Mounted) variant of the same system, they took it out and live fire tested it. There was a plane pulling a drone, so they marked the tow-plane as a non-threat and turned it on against the drone. The gun ignores the drone, spins on the tow-plane, and starts trying to ventilate it while panicked people are hitting abort. Enough rounds got off that there was one very pissed off pilot expanding people's vocabularies and making accusations about their parentage. Fortunately, he was uninjured, and the plane survived with a little patching.

To make a short story long, it turns out the radar was able to see the tow-cable. While humans saw them as two separate planes, the Phalanx saw it as one long plane, and it was shooting at the leading edge.

The soldiers get to play with the toys, but there's a perverse sense of humor in working on them or making them as well. Where in the hell are you going to have fun like that programming in the commercial world?