Rockwell • North American Aviation (NAAO) - 2770 East Carson Boulevard • Lakewood, California - I came of age at NAAO. I got my security clearance, learned to deal with eccentric co-workers, learned about nepotism and how not to mix substance abuse and work, got "hit on" in front of my parents, and learned how NOT to exit a company. 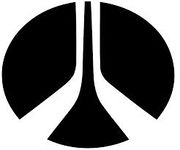 NAAO was a division of Rockwell, which later became a division of Boeing, that was in El Segundo and Long Beach, California (next to the airports); they were most known for the B-25 and P-51 Mustang of WWII.

They needed someone to do FORTRAN programming, and I'd done some FORTRAN in college, and knew BASIC and low level language; this would be cake. Fortunately, the interview went well, and I was in. The environment was interesting in that it was a huge warehouse (like a K-Mart), with these bays of cubicles, where 10 people sat in a bay and shared a mega-cube. It was loud, had old desks and equipment, people were treated like factory workers; but I was coding professionally and enjoyed it.

North American was a key contractor on the B-1B bomber; that had been re-instituted by Ronald Reagan (after Jimmy Carter had scrapped the B-1A). They were making a maintenance trainer; You not only have to build airplanes, but teach people how to fly and maintain them. And in order to train them, you need these complex devices to simulate parts of the airplane, because the cost of building these simulators is far cheaper than building extra airplanes - and you can teach people easier, and make less expensive mistakes on a trainer over the real thing. 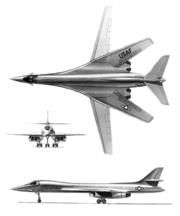 I was doing a maintenance trainer; you have to have error messages and warnings when people do things wrong. I took my sense of humor and applied to what I was doing; this was just test data that no one else would see. I had example cases like if you lifted the landing gear while on the ground, lights would flash and buzzers would go off that said, "You squashed your ground crew, moron!" Of course in the real world, there are sensors so that won't actually let you squash your ground crew; but the idea was simulate some of the test cases. I had another one that if you made the same mistake three times in a row, it would say, "Since you can't learn from your mistakes, you're promoted to General". And so on. I crack me up.

If you can't guess where this is going; I was far ahead of schedule on my part of the trainer, so someone decided to copy and forward my code the Air force to show them how good we were doing. The good news was that we demonstrated that the trainer worked and we had progressed well. Until an Air Force General in charge or procurement validation not only squashed his ground crew, but also made other mistakes three times in a row.

Did I mention that some generals have very limited senses of humor?

To say the shit hit the fan is an understatement. Fortunately for me, I was in the clear; someone had taken my secure data, without my permission, and my direct boss was having a hard time not busting up when I demoed what had happened. I was called in for an ass-chewing, when I said, "Let me get this straight, someone removed my secured code, from a secured lab, without getting my permission, before sending it outside our secure facility...", they realized the violation of protocol and said, "You can stop right there, this is not your problem. Thank you for your time".

Despite that minor snag, I was producing a lot, and having a good time. And we'd done our demo, and I'd gotten positive recognition for being so far ahead of schedule and producing. Also people had learned to ask me before touching my stuff.

A little code with your documentation?

To understand aerospace consulting you really need to understand writing. There were these document standards (Mil. Spec 2167), designed so that for each line of code you wrote, you had to create 5 lines of documentation. I'm not kidding, there were all kinds of metrics for that. It doesn't have to make sense, you just have to do it.

The military wants to know how everything works in excruciating detail. Ironically, you produce so much documentation in Mil-Spec, that no one actually reads it. It is like a strategy with lawyers. In discovery they are forced to give the opposing side all their information; so what they do is just bury the important stuff in reams and reams, and boxes and boxes of garbage, so that it will take more money to discover what you need than most can afford. 2167 can be like that. Even though it is laid out pretty well, most people can't write well; even if they can write a lot. So they turn in mountains of useless stuff, with occasional nuggets of goodness, that no one can find.

The good news is that if you work aerospace, you're so used to documentation and nasty-assed procedures to try to slow you down, that when you go into the real world (see anywhere else), the documentation they require is a breeze. All the whiney commercial coders, complaining about doing documentation, really need to see what it is like elsewhere.

The valuable part of it is that if you can logically lay out a computer program, then you can logically lay out a manual. That is, if you try. I tried. I learned that I enjoyed writing for humans as much as computers, and had an aptitude for it (both quantity and quality). On top of that, while the Standards had the structure of some of what you'd have to write, it had many gaps. I quickly created internal standards documents for what we'd write as a project and company at the more detailed level. These standards were for code and flowcharts and so on. This gave me a feeling of real power, and no one realized that a teenager was making the standards for the entire project; I was having a ball.

I was doing good, and a couple of years into the project, when they had some follow on work down in San Diego, at Cubic Corporation. Rockwell decided to have me, as one of their representatives, move down to San Diego and work at Cubic, to teach them about how the system worked.

They put me up in a furnished apartment on Mission Bay, and I lived there for 6 months. So I was 20, with a paid for apartment on the water, and I was working all the time. In hind sight, I should have drunk a little more from the pool of life; but I was a bit of a work-a-holic. Plus, when I did go out, it was often with friends from work. My contemporaries and peers were mostly in their 20s and 30s. Of course, I was also able to hang out in bars, even though I was underage; who was going to question a bunch of engineers? And because I was with that crowd, I was occasionally able to pick up women that were a bit more mature than I.

It was also weird, in that I was sub-sub-sub-sub-sub-contracting. I had my own company (for tax purposes), and was contracting to a placement agency, that contracted me to Rockwell, that contracted me to Cubic, which was contracting for the Air Force. I figure someone was making at least $100 an hour for me, though I was making about a quarter of that. Which wasn't bad for a teenager in 1983, with a paid for apartment and daily stipend for food and mileage (per diem). But it was good to know, and built a sense of pride, that the work I was doing was that valuable.

Later, we went back to Lakewood (Long Beach), and went back to the old routine. I sort of missed all those perks. But heck, how else are you going to get people to go live in some other city for many months at a time?

It is a Mac world 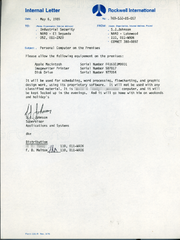 I used to help management with their presentations. So I was doing these spreadsheet for them that took literally 15 minutes to insert a row in on the PC's of the day using Excel. This was 1985 and computers were not what they are now. I decided that was ridiculous. I brought in my Mac from home, after getting permission. It is not easy getting permission to get your personal computer brought into a secure facility, but I managed. Ironically, I had to leave a programmable calculator outside because it had a memory button, and they'd totally search my briefcase, but I got permission for the Mac. Don't even try to understand the rules in Aerospace.

So, I'm a kid, dragging in my Mac every day (or week), in one of those hernia inducing vertical duffle bags, and the 30 lb Mac 128 (later 512) was my first portable. The same spreadsheet that took 15 minutes on the PC, took like 10 seconds on the Mac. After that, they OK'ed a big purchase of Macs. I think Apple still owes me for that one. Soon after, I was helping out their IT department and network admins to install and maintain Macs, and how to connect them to their VAXes and other mini-computers as smart terminals.

After 3 years I was burned out on that place, and ready to seek alternatives on other projects. This one was past development phase, and everyone was just sitting around doing boring maintenance stuff; slowly. I wanted to be where the excitement was - so ever onward.

After I left, Rockwell (NAAO) did call me back a few times for various follow on contracts. Both for the B1, and later I got to work on the AC-130 Gunship. The AC-130 was cool; basically a C-130 troop transport with a Howitzer and a lot of gattling guns and ammo in it, all pointing out one side. It circles around and rains heck on our enemies until it runs out of ammo, and convinces the enemy that they'd rather piss off God than the U.S. military, as it rains lead, depleted uranium, and explosive shells. I don't know who thinks of that stuff, but you've gotta be glad they're on our side.

Even outside of Rockwell, I kept running into the same people around the industry for years. I really think of NAAO as one of my first really big jobs. From 18-21 is a long time for a kid. I had fun at the NAAO. I came of age. There's nothing like the defense industry in the 80's.