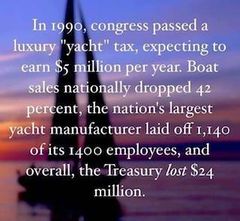 Democrats in Congress passed a "fair share" luxury tax (30%) on airplanes, cars and yachts (as part of an Omnibus Budget Reconciliation Act of 1990), and promised it would bring in $9B over the next 5 years. What actually happened is:

This was the famous quote where George Bush ran against tax and spend democrats with the promise, "Read my lips, no new taxes!". The leftist Press/Democrats got him to compromise -- then railroaded him as a liar for compromising with them. This helps set the tone for future Presidents that could learn from history: never trust or compromise with the Democrats -- they will use it to put a knife in your back. And lest you think it hasn't happened since, when George Bush Jr. compromised with Ted Kennedy on the NCLB (No Child Left Behind), the Democrats did it again -- he passed the bill they wanted, then they attacked him for unfunded mandates and the like -- because he'd passed the funding increases separate from the NCLB itself.

There's some contradictions on facts around this, depending on who you listen to:

So polemics can flam-flam the numbers and make it not look like the disaster it was, especially for people who want to believe that people don't respond to taxes. But the evidence for the rational is quite the opposite: it killed an industry, it cost jobs, it cost a ton of money -- and was cruel and unfair. The people most hurt were the blue collar workers that were put out of jobs -- and skilled yacht craftsman couldn't find like work easily, so that revenue/life setback was hugely frustrating. Any Democrat that defends the cut, cares more about his political agenda than the people they hurt.