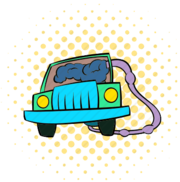 These things didn't just happen to me. Maybe it's our family?

My Parents were living in England for years. They were kind of bigwigs in town; a combination between ugly Americans and foreign socialites - at least in their town. (Though my Step Dad was from Kent, he'd lived in the U.S. long enough that he didn't have a local accent to them). My parents were pretty much, "go, go, go", type-A party-people. And they used to have a lot of dinners.

After one private dinner between them and a neighbor who lived across the street, he went home (literally, across the street), went into his garage, started his car, and waited for his wife to come home (from a trip) to discover the body.

Now, I wasn't there, and was in fact a continent away, so this one hardly counts on my tally board of discoveries. And my Parents weren't impressed with my humor when I wondered if it was the food or the conversation that finally put him over the edge. Alright, maybe that quip was a bit gauche.

Another one bites the dust

Just to make sure it wasn't a fluke, my parents moved back "home" soon after that; coincidentally.

They move back to their house in Orange, California... and the neighbor girl across the street hung herself in the Garage.

I say girl, because I knew her growing up (since she was about 6 and I was about 11), she was in her 30s when she took her own life.

I muttered to my brother, "what is it about Mom's proximity that make people to want to party with Elvis?" He laughed. My Mom made a bunch of hand-waiving Italian'eque guilt-trips about what a horrible son she had raised to say such mean and hurtful things. (You have to know my Mom, she wasn't truly hurt or offended, she was just mad that I'd made a joke at her expense).

The truth is, this case had nothing to do with my parents (other than coincidental timing). She had suffered under chronic medical conditions and chronic pain, which had caused depression... and just couldn't take it any more. She left a note.