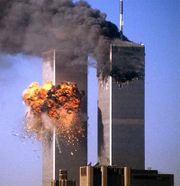 On 9/11/2001, I went into work like normal. I worked at a Newspaper, improving their Internet presence. My office was in the Press building. When a friend came in and said, "A plane has hit the Twin Towers". And I thought, "another silly pilot flew into it while in fog or something, like happened to the Empire State Building in 1945."... but I went down to the Newsroom to see the hubbub and read/watch what was coming across the wire. This is what happened to me that day.

The TV's were on (watching for other reports), the editors were furiously at work writing outlines of stories and re-laying out the paper around the news. We were shifting from evening to morning paper -- but at the time, we were still laying out for the afternoon, so this enabled us to be the first paper in area to get out. Though of course others were working on special editions, this was a small piece of history.

Based on the size of the hole, that didn't look like a Cessna had done it. And the wire seemed to imply it was large passenger plane, on a clear morning. Well, that's more concerning. Thoughts of, "La Guardia and Newark are both close to downtown, but the approaches are wrong to fly into a building".

And while watching, the second plane flew into towers, and another 500+ people lives ended, and the newsroom went deathly silent. I muttered terrorism. The story, and the history of the world, had just changed. People looked at me, as the thought sunk in. One plane might be an accident, two was an attack. People went back to work, reading, watching, compiling, writing, and laying out. All while trying to digest what was happening. Reports of other planes started coming in, and while I wrote a tech column for the paper (not news), I was still doing what I could to proof and help.

The Editor in Chief, wrote the Headline, "Terrorist Attack" on two lines (filling the top of the page). But it didn't line up right (word sizes were wrong). He was a good guy and wouldn't take offense, so I reached over his shoulder and without a word deleted the "ist", and it became Terror Attack -- which caused everything to fit nicely. He looked over his shoulder at me, and nodded, and that was the headline they ran with.

Then while watching TV, the first tower went down.

You could have heard a pin drop. One of the editors said, "What happened, where did it go?" She couldn't digest what she had seen. I replied, catastrophic failure, it collapsed. The other is coming down as well. (I tend to get dry and analytical when on overload). Another few hundred people had just died. Someone sobbed, another quietly wailed "No". Seasoned reporters, who had written about all sorts of tragedies and horrors were having a tough time processing watching so many lives extinguished for completely unknown and unfathomable reasons. What could these people have done to deserve their fate?

As the morning wore on, there was lots more to digest. The Pentagon got hit, that information was always less clear, another plane had gone down in Pennsylvania -- actually only a few hours from us by car. We drove there later and saw the empty field and scarred earth (before it became a memorial). And later hearing the recordings and last acts of those brave folks was both tragic and inspiring. Their last message to humanity was a combination of "I love you" to those they cared about, about "Never give up", while recognition sets in there's nothing you can do to save your own life, but maybe you can save others.

All the planes in the nation (or heading to it) were told to land. Fighters were scrambled. And emotional overload continued for days, as stories of people you knew were directly affected by losing a loved one, or missing. The tales of the first responders and their widowed spouses and children without a parent trickled in. About people trying to do the right thing, and a few surviving miraculously, and others dying trying to do right by the world.

I started school there (Downtown) a year and a half later. My hotel overlooked the hole that they were digging out, where the buildings had once stood, while rebuilding the path station. And going to class, I walked by the construction site, that was to become a memorial. Life has to go on, you need to overcome and rebuild. But 9/11 was still often discussed, and hearing stories of friends and classmates, that lost people they knew. One was stuck in the train-tunnel under the river for hours, and had to walk out -- because the first plane had hit, and they stopped the train that was on it's way the PATH station (underneath the towers).

I also remember a few years before that, we had visited NYC, and done the Empire State building, plays and a few other touristy things while there. And we talked about going downtown to the Twin Towers (Windows on the World)... but at the time, we had a full plate and said, "maybe next time".

Every day (for the next couple years) that I walked by the construction site while going to school, I remembered that that time to visit Windows on the World would never come. It reminded me that in life, "Next time", is never guaranteed.