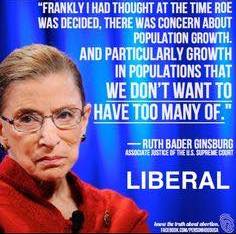 Supreme Court Justice Ruth Bader Ginsburg said in Sunday’s New York Times Magazine: “Frankly I had thought that at the time [Roe v. Wade] was decided... there was concern about population growth and particularly growth in populations that we don’t want to have too many of.” The comment, which bizarrely elicited no follow-up from interviewer Bazelon or any further coverage from the New York Times — or any other major news outlet — was in the context of Medicaid funding for abortion. (FakeNews is not reporting both sides equally).

Like virtually all that are pro-abortion politicians, they also feel that there's good humans and bad humans, and a lack of compassion for those who are lesser. This goes back to planned parenthoods founder Margaret Sanger. So it's not a surprise in thought... but most Democrat Politicians have a contempt for the people (their voters), and know that if the publicly tell the truth, they can't get elected -- so they do the only thing they can to stay in power: they lie. The fact that a Supreme Court Justice slipped on the truth is more than Newsworthy, if we had any journalists left that knew how to follow up on an, "OMG! Did you really just say that?" question.