Incompetence is their best Defense - The NYT charged Sarah Palin/Tea Party with being responsible for Gabby Giffords shooting in 2011, because she once ran a campaign flyer that had crosshairs of various weak districts (including hers), and a conservative loon had obviously followed their suggestion. The Democrats had of course done the same exact thing to Republican districts (or used targets), but the Times doesn't let moral consistency get in the way of slander piece. Everything was wrong in their assumptions: the shooter was an atheist, loved John Kerry and the communist manifesto, hated Bush, and wasn't aware of the flyer. They were forced to publish retractions/corrections on all that in their News Pages, but continued to write/allow articles blaming Palin in their Editorials, long after those corrections were issued in their own paper. Palin sued, and their defense was that they were negligent but not malicious, and the Judge sided with them. The NYT can't help it if their editors and fact checkers don't read their own Newspaper or retractions, nor be expected to know the basic facts before writing on them. Seriously. 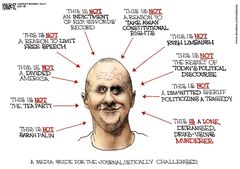 Eventually, the Judge sided with the NYT and ruled that NY Times can win a case by proving the author of the NY Times Editorial doesn't read the NY Times (nor did any of the fact checkers or editorial staff that the piece went through), so can't be expected to know they were slandering Palin. So their incompetence has become so accepted, that they can dodge responsibilities for truthfulness, that you and I as non journalists, would never get away with.