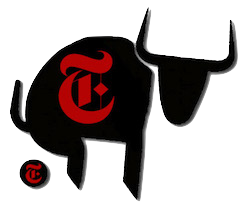 There was another anti-gun hit-piece in NYT titled "I’m a Responsible Gun Owner? Seriously?". They gave up all semblance of journalism and integrity, and decided to turn over their editorial pages to founder of UT Students Against Guns on Campus (with no common sense or rebuttals allowed, as usual). And basically told the story of an irresponsible "journalist" (actually activist), posing as an irresponsible gun-owner, to try to dupe the gullible on how easy it was to guns, and what a threat they are (despite evidence to the contrary).

The story is about one anti-gun advocate, who sat through a 6 hour training, showed proficiency, waits up to 60 days for state/local background check and processing, and then is most likely to be able to carry a gun -- assuming of course he doesn't have any Class A or B misdemeanors or disorderly conduct's on his record for the last 5 years. But he exaggerates that into anti-Texas hit-piece, that the provincial NYT readers and editors won't know enough to know better.

Class A's and B's include stealing anything over $50, carrying a gun illegally , fixing a refrigerator or selling cigarettes without a license. Failing a safety inspection on your amusement ride. False statement on any government form. Hazing. Bringing a clock that looks like a bomb to school (seriously, Bomb Hoax is in there). Illegal handling of shellfish. Dynamite fishing, or other types of illegal fishing. Insurance fraud, and so on. So basically, you can't have done much wrong in the last 5 years, or it's a no go.

The author is either poor at his craft (and the editors more so), or he intentionally mislead his readers into thinking that he walked out with a license after, "10 minutes", and missing his target from 9'.

The facts are that a 6 hour training course, and hitting your target >70% of the time, with 50 shots, at 9', 21' and 45'. (And you better do a lot better than 70% at the shorter ranges). The training spends most of its time telling you your responsibilities/liabilities (as well as checking for gun safety, and how to handle any situation where you have a gun).

Remember, a gun is an escalation, so folks carrying have to be more responsible than anyone else because of that increased threat/risk (to themselves and others). It means that they have to be better than anyone else, because they get less leeway under the law.

And history/facts plays that out. Conceal and Carry holders commit less crimes than average. They have far fewer accidental shootings (or hitting civilians when they do shoot) or criminal shooting charges brought against them than the average Police officer. This isn't because cops are bad, they just intentionally put themselves in more situations where they'll have to shoot, and thus have higher incidents and accidents. CCW/CHL's are trained to NOT do that, and only draw in extreme circumstances -- which is the norm. (So they often get as much or more training, and use their weapons far less, and only in far clearer situations).

There was a guy with a gun permit next door to the San Bernardino shooting: do you know what he did? He protected his property and employees as he was supposed to. He prevented a spread of the event, but he didn't cowboy over and confuse law enforcement, he wasn't reckless. Like most responsible people in that situation, his responsibility is to protect him and the people immediately around him, and nothing else. So unlike many other cases where a conceal and carry permit holder was able to stop a mass shooting (because they were more involved), this guy did the right thing, which was strictly defensive.

But back to NY.

So one guy, with little formal training before hand, was able to get a license -- and learn all the things he shouldn't do with a gun. OK.

Should he carry without more training? Not unless he's a moron. Any responsible person, and as part of the classes, I'm sure he was reminded this repeatedly, he should shoot regularly and get instruction and more proficiency. So yes, a foreign national or NYC person who lived on public transit, can go to Texas or another state and take a drivers license test (which is less onerous than the CHL), and get one of those -- which allows them access to a weapon that kills more people per year than guns do. But that doesn't mean their job is done -- they need to practice and gain proficiency there too.

The point is, let's compare choices:

So there are outliers that will get a permit without much prior experience, and then carry around and think they're a cowboy. Most likely, they're going to do something stupid, and get themselves put in jail -- however statistic show that this almost never, ever happens.

The far more common case is responsible adults, with years or a lifetime of experience with guns and gun safety, are wasting a day on stuff they already know, to be allowed to exercise their rights to self defense. And the gross majority will never pull their guns, and if they do, they'll have a better record than the cops do with them. And I'm OK with that.

What does it all mean? When you're incompetent, about the best you can do is try to distract:

Since reporting any of that would be factual and show that conceal and carry laws seem to have no measurable negative consequences (and only positive ones), and that most gun owners are far more responsible (and educated?) than non-gun owners (especially folks in gun-control mecca's like California or New York), the Times decided to miseducate their gullible readers (again), commit lies of omission (about context), and skew the facts for their anti-Liberty agenda. As usual.

So instead of being dubious about one guys right to carry a concealed weapon, the Headline should have been more dubious about the Times ability to do their jobs, and said, " I'm a responsible Newspaper? Seriously?"