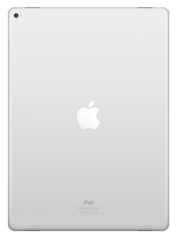 I've been living with my iPad Pro for about a week. I have to say, if you want an iPad, it's better in every way -- bigger, better, faster... and more expensive. But if you're already paying $700 for an iPad Air 2, then $949 for the bigger screen, really isn't that much more. (Both for the 128GB, no cellular options -- you can go cheaper or add cellular if you want -- but I use cell phone MyFi/tethering when I need that). And you get a better camera, better keyboard and better stylus options (the latter two for additional price).

I have had lots of iPads and iPhones. (Just about every model). I leapt into an iPad mini, thinking "cheaper and more portable", but I knew I really just wanted a phablet (bigger iPhone). I quickly discovered the iPad mini is a great device... for kids. They have good eye's, and can be just as entertained on a 7.9" display as a 12.9" one. It's easier to carry around, lighter, and because it's smaller, there's less leverage on the display, so I assume harder to break. And my wife loves hers (she's a flight attendant, and so likes the lightest/smallest thing she can carry, that's still functional). She's getting to the point, where she sometimes carries two (mine and hers), so she can watch TV or browse on one, and answer emails on the other: nerd Girl.

For me, I was the other use-case. I found that once the iPhone 6 Plus came out, I could use that in just about every condition where I'd want the iPad mini. The mini was too big to fit in a pocket, and too small to be that usable when I pulled it out of my bag. There was virtually no cases for me, where I'd want to bother to carry it, and not wish I'd had the bigger iPad with me instead.

Which is sort of where I'm at with the iPad Pro versus the iPad.

With the Pro, I can see more. About half the apps (for now) are working in a zoomed mode, so it's just a bigger iPad. That difference means I can use it without putting on reading glasses. (Presbyopia, sigh). But again, if I'm already carrying around an iPad (which fits in a laptop bag), then why not have the bigger one, which still fits in the same bag? If I had a man-purse or something that just fit the regular iPad, and no more, then sure. Going smaller makes sense. But I carry a backback, and at that point, bigger (but still fits), is better. (No double entendre intended).

That isn't to say the device is perfect. The biggest disadvage of the iPad (and pro) has always been the OS. IOS is great for iPhones, and that's what an iPad is -- a bigger iPhone. So as a tablet, the iPad Pro is a better tablet. As a laptop replacement, or convertible device? Not so much.

Tim Cook talks about how he uses it as a laptop replacement, and it is possible. If I'm doing one thing -- just taking notes, browsing, watching a video, checking email, etc., it's fine. The lousy keyboard options aren't that bad. A heavy clamshell (pseudo-laptop), or Apple's little flip-out cloth one, both work, good enough. Not quite as good as their laptop keyboards, and worse if you're trying to use them on a lap. (Microsoft's, "Lapability' issues come into play). You can use it, and it works OK. But the OS is still the limitation for me.

IOS8 and before, didn't really let you multi-task at all. Any workflow requiring 2 apps, was torture -- it was, open one, copy something, click home, find the other App, open it, paste, all with annoyingly slow gestures, that weren't easily memorizable (e.g. they never quite got into muscle-memory and natural for me). It was barely usable. You could do some things, if you had to, but if I was doing anything like writing an article or complex email that had to go back and forth between browser and email or notes, it was annoying. So for me, usually, as soon as I think I have to do something like that -- my laptop came out, because it was so much faster.

IOS9 and iPad Pro are improvements in all that. You have the ability to split the screen (with some apps), so you can have email on the left, and browsing on the right half of the screen -- and double the RAM means it's usable in that way. And it works. The interface is a little clunky, and still requires a few steps, but you can actually use it. And if that's all you do, use two Apps, or one App, then iPad Pro and IOS9 are fine. Unfortunately for me, almost all my workflows seem to use 3 Apps, and it's not much better than before for me.

I played with the SurfaceBook (convertible) at the store. And I have to admit, there's a certain allure to a laptop with a tear-off screen. But then Tim Cook's claims that the surface book is "diluted", is not wholly inaccurate. As a laptop, it's not light, but pretty good. As a tablet, it's much heavier and lower battery life (and has fewer Apps) than an iPad Pro -- so better as a laptop, worse as a tablet. It's expensive, and the UI there has issues -- depending on if you're using touch or keyboard, things change. It's not quite smooth. So it's like having a swiss army knife -- you can use the little corkscrew or fork attachment, but far better to have a real corkscrew or utensils.

And for the price of a decked out SurfaceBook, I can buy a iPad Pro and a MacBook Air -- which is probably better for each use case individually (though not as powerful for a few heavy Apps) -- but now have two screens. And lest you think that's not useful, not only is it sometimes handy to watch a movie on one, while typing on the other -- but you can run an App Called Duet, which converts the iPad into a slightly laggy second screen for your laptop. Now I normally use 3 displays at work, and love extra real-estate. So this is not an un-usable workflow, if you're a coffee house power user. Setup your Lappy, and a Tablet, plug them together, and bam -- instant workstation, and guaranteed to work better than socks with sandals to keep the girls away. Now all this is theory -- I only played with the idea a little. And I'm usually not setting up remote. But if I did, I like the cost-value return, better than one convertible.

I like everything about the iPad pro, from it's longer lightning cord, to the bigger display, much faster processor (it's really fast and pleasant to work with), and so on. If you're getting an iPad, and the Pro fits in your carrying bag (or wherever you're going to keep it), then get the Pro.

But the iPad Pro really calls out the limitations of IOS: it's a phone OS that's trying to be used on a tablet. While Microsoft is trying to use a desktop OS on a tablet. And Android feels like a series of ripped off behaviors from everything, on a tablet. But none of them feel like they've quite gotten the whole multiple applications working on a single tablet, quite working right, yet.

So in the end, for me, the iPad Pro is a better iPad -- but it is not yet a Laptop replacement (for me). But I can buy that in other people's workflows, it could be. As a sketching device, it's brilliant. And everything I want to reach for a tablet for, the iPad Pro is better. But it's still running IOS, and IOS is still behind Android and Windows when it comes to power user functionality.

So it works better, 95% of the time... and the other 5%, I'm muttering insults about Jonathan Ive's parentage under my breath. ("Why couldn't he be more a human factors guy, and less a graphic artists?"). Yet, a 95%+ success rate is pretty high, and high enough to justify the costs.

And tablets are evil devices have made me much more ADHD -- like when someone mentions something on TV that I want to look up, and I don't have a tablet (or laptop) handy, I feel so contrained -- not to mention dumb games like Clash of Clans, Boom Beach, or even killing zombies. So I don't think I can live without a tablet. And if I had a choice of only one tablet, the iPad Pro is the one I'd get.