There's a lot of whining and complaints about the New MacBook Pro's (MBP2016). Some valid, many overstated but heartfelt. But I think the problem was more about messaging than delivery. For me, and most users, it's a great product. 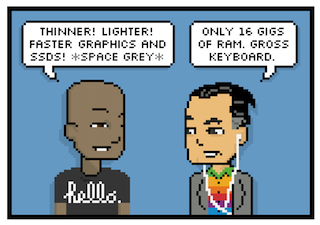 I love the 2016 MacBook Pro, it’s better in almost every significant way over the prior generation: smaller, lighter, faster, bigger trackpad, the touch bar (function key replacement) has slightly more utility, screen is brighter, speakers louder, I can get It in a better color (I like darker to silvery), the I/O is faster, the power cord is smaller, and can connect to another one of the same devices, and so on. But that’s not going to slow the glass-is-half-empty crowd from throwing shade.

This humorous article "Button Reviews The New MacBook Pro" sort of summed up a few people's complaints -- the New MacBook Pro costs more, does less (from a pro-centric point of view) than the previous generation. And so going backwards in time to the MacBook Pro 2014 would be an improvement for them. The problem is that Pros aren't the "average user", and many forget that.

If you're a pro, and you want HDMI, a closer to cutting edge GPU, more-travel keyboard, more I/O ports, and so on, the old device filled that niche better. (And pros are infamously reluctant about change or "impacts to their productivity" as they'd call it).

On the other hand, if you're the average user, low-travel keyboards, a bigger trackpad, Touch Bar, thinner, lighter (which is only achievable through compromises in CPU/GPU, etc), and standardizing on a new port, are all improvements that the average user will appreciate. (And the pro user, might not). The new device is quicker than the old, it's just not as much quicker as it could have been. So it's all relative and your enthusiasm is reflective of the kind of customer you are.

Final Cut Pro all over again

This hits me as Final Cut Pro X (FCPX) all over again. Apple release FCPX to howls of hate, and venom spit at Cupertino, and it lead to a huge migration away from that product by old customers, while new customers liked it and found it far superior to the old one. It was a net loss in key users, but I think they picked up as many users as they lost.

It wasn't that FCPX was a bad product. Many non-Pro's (aspiring, casual pro's, etc) think it's a better product than the older FCP7 (Final Cut Pro 7, that it replaced). But most pro's do not like it, because it changed their workflows too quickly and dramatically, and gave up some features in the transition. (It fucked with their workflows). Pro's wanted slower progress -- or a forked product line. (With FCPX as a feeder product for FCP7). Apple had to agree to support FCP7 a bit longer, to assuage the old livid pro users -- and still the transition was too fast for them.

It's all in the messaging. If Apple had released FCPX as "Final Cut Prosumer" or "Final Cut Light" -- and kept FCP7 as the pro version, with more modest FCP8 update (a half step), the customers and press would have adapted MUCH better. They could have cut FCP8 later, and not spoiled the launch of FCPX.

If MBP2016 had learned from FCPX

I feel like the MacBook Pro 2016 is deja vu all over again.

It's a better product for more people than the Old MBP. It's just that it made tradeoffs that Pro's didn't want to make. For them, the old size was good enough -- they wanted CPU/GPU power and memory over size. They care about things that are fractions of a second in each workflow, and are skeptical of things taken away (like their function bar). And so on.

If Apple had just speed bumped the old MacBook Pro (in a single top-end SKU) and used the size/power capacity to offer a more "Pro" machine. (Maybe with a couple new ports, instead of all), it would have made the Pro's and Press a lot happier. Which is ironic, since Apple kept the old MacBook Pro's around for a while, in multiple SKU's, confusing the product line as it is.

Of course, that's not nearly as easy as it sounds. And hindsight is always easier than foresight. It might have just been "that time", where the Press needed to pillory Apple, and nothing would have made them happy. They're really pissed at something else... like Windows touch screens and Apple's lack of them, or the lack of desktop updates, as so they attacked this instead. (You learn the Press and Apple fans can be like women, sometimes when they're criticizing you on X, it's really about something else).

All laptops and computers have compromises, and the MBPtb2016 has a few:

There is a small minority of customers -- but a large and vocal special interest, that has valid complaints -- so I get their point. But because I'm not one of the users that has a big problem with the new MacBook Pro's, and thinks that for most people, the compromises made will be the right ones. So I have to believe it was more a messaging problem (and a few nuances like lack of a cable adapters) than a technology one.