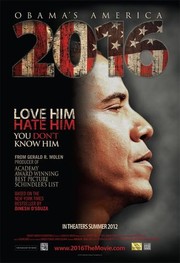 Went and saw 2016: Obama's America, just like I saw Fahrenheit 9/11 when it came out. This was much better.

While liberal reviewers panned it (because they didn't want any of the sketchy truths about Obama to get out), don't let the reviewers hatred (25% approval) fool you -- viewers gave it a 73%. I was definitely with the majority of viewers on this one. So this -48% difference just shows how out of touch and partisan most movie reviewers are. Discrepancies like this are common when it come to conservative documentaries, and go the other way on liberal ones.

Schindler's List producer Gerald Molen, and Dinesh D'Souza had some interesting information. Most of it is already known in dribs and drabs, but it does its stated goal of giving to you what the Press mostly ignored: the backstory of this President. It also gives you what the author thinks is the secret of Obama's success, and what he thinks motivates the man (and thus a model for what 2016 would look like).

One of the least intelligent and most unfair reviews I read was,

"Conservatives have Dinesh D'Souza. Liberals have Michael Moore. We all lose."

I do think extremism, distortions, and rampant partisanism (especially under the flag of faux objectivity and fairness) bifurcates the nation and makes us all lose. But this was not that. Moore's films are.

I'll look for evidence otherwise, but unlike Moore's work, this was not a hatchet job, or that he intentionally takes clips out of context, misrepresents, and tries to portray people as pure good or villains. It didn't piece together all the mistakes, gaffs or vacations to make Obama look dumb or corrupt. It just tried to explain influences on the Presidents life, and leaves the rest to the viewer. So it's a LOT more nuanced than Moore seems capable of fathoming.

But that's not to say it is without bias or agenda. Dinesh just seems to be far more subtle and willing to offer evidence that both supports and contradicts his opinions, and let the viewer decide. (Though he does state his opinions and biases openly). So you know you're getting it through Dinesh's lens, but that's not the same as ambush journalism mixed with liberal amounts of propaganda and disinformation.

I suspect part of Dinesh's objectivity is that he knows the press holds conservatives accountable, and will fact check him diligently -- and any of his mistakes will be highlighted in the same what Michael Moore or Al Gore's are glossed over or made excuses for. I suspect another part is that he knows how to appeal to his audience, and conservatives and centrists tend towards being older (more mature) and thus demanding more moderation, and will hold errors against him. But whatever the reasons, his softer style, is FAR more appealing to me, and less bifurcating for the nation. You don't walk out thinking the President is evil or an idiot.

And while I appreciate that the 4th estate will do it's job half of the time (and fact check all his claims, if this gets the success it appears to be getting): I would appreciate it more if they had done it all the time. And this entire film would have been a redundant flop at the box-office, if they already had been doing so. So while people will have heard many snippets in here, no one before has put together this clear a narrative.

People see what they want to

I don't expect a real good history of a President until a few years after their death (and a decade or generation after they're out of office). And this doesn't change that. But then he isn't judging Obama's decisions, just looking at what likely motivates them.

The story is almost more about Obama's sphere of influence than him directly. What his friends, family, mentor and Father believed -- and what many of those people believe about Obama. In fact that was one of the most interesting points: that Presidents have generally been people we knew for a long time before assuming leadership. And that this election will be different from the first one, as we're not making him in our image any more, he has slowly defined his own.

While the picture is of a far left anti-colonialist polygamist wife-abusing Father, and generally not a great guy. And Barack seems to idolize based on stories his far left mother told him all his life, and inspired Barack to write "Dreams from my Father". And it goes into his left leaning grandfather, his far left mentors and friends, it's still up to the viewer to decide if the sins of the father should be lain upon their sons lap. Or whether one's indiscretions of youth, still apply today.

I of course think people should only be judged based on their own actions, not their parents.

I can relate to Obama's story as I had an equally absentee father, a mother who married multiple times. I did have a step Dad in my teens that helped fill the gap. And between my step Dads, role models, and crazy family, I didn't idolize any of them, nor write a honorarium to their beliefs. I just chose to take what I thought was the best from each (learn to do the opposite of the parts I didn't agree with), and forge my own path. But I'll readily admit the naive beliefs and mistakes of my youth. I can't say I've seen any indication that Obama has done the same.

In the end the movie does more than anyone else has to date: it tries to give more people a real understanding at where Barack came from and what his influences are. It's up to you to decide what that all means.

So informative, if a bit slow in parts. But definitely not a waste of my $6.00