🇱🇰 Colombo, Sri Lanka: After ignoring warnings, 8 blasts hit 3 churches and Hotels in an Islamic Terror attack on Christians during Easter mass. Much of the media couldn't bring themselves to say Islamic Extremism or Christian victims. Clinton and Obama colluded to shit-tweet a new term, "Easter Worshipers", in order to avoid saying "Christians". Add to this their mealy mouthed condemnation of an organized terrorist attack against Christians, which lies in sharp contrast to their harsh broad brushing of all whites/right wingers for the acts of a lone crazy liberal in New Zealand, just a couple weeks earlier. 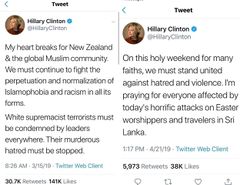 Look, I completely agree that killing Muslims for being different is 100% wrong. But then so is it against Christians, and it deserves the exact same treatment by the media and their leftist leadership. Any deviance from that path, polarizes and divides us between those who want to see equal treatment and justice, versus the intersectional snowflakes who will write off injustices against the right/Christians/whites, because of their distorted view of History.

So in scale, islamaphobia is not leading the deaths of any, let alone hundreds of Muslims in America. (There were a few dozens, in an extremely rare and individual attack in NZ). Whereas in many countries with a lot of Muslims, mass murder coordinated attacks on Christians are far far far more frequent and large in scale -- and mostly to the deafening silence or distraction of our leftist intersectional marxists masquerading as Democrats.