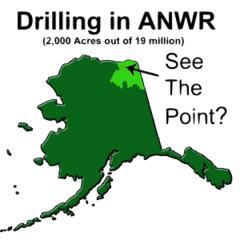 To grasp how dumb the ANWR fight is, I included some pictures.

In an desolate federal reserve the size of South Carolina, the state and locals wanted to drill on 3 square miles of deserted frozen wasteland tundra, in the middle of fucking nowhere (20 million acres of inaccessible nothingness). And the thought that other people might be doing something productive to get us off foreign oil, miles away from anywhere, was too much for the left to handle. They created a misleading ads showing majestic mountains or fertile rivers (that were 500 miles away), having nothing to do with the area we're talking about. They screamed about the caribou and polar bears, again, which had nothing to do with the area we were discussing. Obama promised "all of the above" energy, then obstructed this for 8 years. Once a non oil-obstructionist was elected (Trump), it was allowed months later -- which will result in less foreign energy dependence, cheaper gas, and more jobs.

If you doubt ANWR is a wasteland, here's photos from it in summer and winter. This is nothing like the pictures that Democrats will spin of other areas of Alaska, this is where they actually wanted to explore, and there was no foliage and little life of any kind. And we're talking a few square miles in thousands of square miles of this stuff.

And to understand scale and location, there's these:

While candidate Obama ran as an, "All of the above" energy moderate, President Obama governed as an anti-Fossil Fuel watermelon (Green on the outside, Red on the inside). He obstructed coal, tried to get cap and trade (which would have bankrupted many energy companies), he blocked drilling in the Gulf, and the Keystone pipeline, and cut new drilling permits on public lands in half -- then lied about in the debate with Romney. Then he invested public funds in 34 different failed Green Energy Companies (that cost the public over $8B), while obstructing everything that he could to access 16B barrels of oil in ANWR because it might have made us less dependent on foreign countries for our oil.

Sadly, for him, we got a Republican Congress and Fracking Boom (accessing private lands) helped us in spite of him. Then he and his proponents tried to take credit for all the efforts he opposed. But the informed know better and will not forget.

Once Trump and the Republicans got their first bill passed, they managed to do something in months that Democrats couldn't do in 8+ years -- open up a desolate frozen hellhole as a money and job creation machine, and something that will help the U.S. get off foreign oil. Not hard at all. [1]

I dislike politicians that lie (see all of them). But the bigger the lie, and the more they do it, knowing better, the more I dislike them.

Norway pays for their expensive social programs with oil/energy, we could pay off the massive debt this Pres has accumulated, if he didn't block off the people's natural resources from the people. Imagine if instead of blocking it, he said we can have access, but there'll be a tax that goes to paying down the deficits or for the programs he created. I could respect that.

Alaska wants to tap 2% of an small ugly wasteland in a national part (ANWR), Wyoming wants to tap their oil shale, gulf states want to tap their offshore reserves. Canada and Americans wanted wanted to build a pipeline to tap Canada's reserves. Pres won't let them. Then claims there's nothing we can do about oil prices? Bullshit. Speculators would be scared if lots of new capacity was coming on-line, but with an anti-energy president, they're bold, and we're their victims.

One of the ironies was that Alaskan Lawmakers were pissed, so they tried to teach New Yorkers a lesson, and regulate Central Park as federal reserve. Their theory was if New Yorkers could tell Alaskans what to do, then turnabout was fair play. Sadly, I doubt most Gotham Dwellers will get the irony (their hypocrisy). [3]