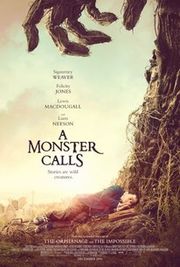 It's a bit of a downer, using tragedy to remind people of what's important in life -- but the messages are beautiful and on-target, if you can handle a movie that's showing the human spirit through the trials that life (and death) throws at it, and a child's shock and frustrations at the powerless of human condition.

Twelve-year-old Conor O'Malley is having a rough year. His mothers slow succumbing to terminal cancer, his estranged father starting a new life far away, and his new life with his grandmother.... and of course a school yard bully tormenting him. He recedes into his life of art and fantasy -- where his local Yew Tree comes to life and tells him three true stories, in exchange for Connor admitting his darkest truth (his nightmare).

This is NOT a happy-go-lucky romcom or action film. But it has the messages that should long outlast the special effects.

But they're all brutal truths that force Connor to accept his own.

It was a bit long in spots. And in hindsight a bit cliché and predictable -- sort of Dickens'esque (ala Chrismas Carol). But it was way, way deeper than one expects from a monster in the closet kind of film. The dialog, acting, visuals, and message were dead on. If you don't cry, then you're a heartless bastard. But it's a good cry, while watching others come to terms with the meanings of grief. And through that, reminding them of what's important in life.