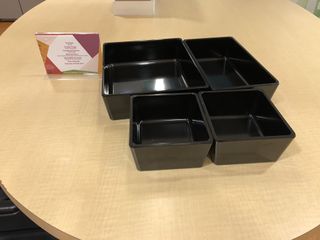 Free Snacks, along with Free Soda's, is a cultural norm at Adobe. But like many things at big companies, it's not what you have, but it's about which direction you are headed. Little things can go a long way to annoy your base. When other people hear free snacks and sodas, they think "Wow! What a great company!". And it is pretty nice. But if you ask internal people, most of them complain about the snacks/drink situation, because every couple years, Adobe figured out how to make a good benefit worse.

There's this inherent problem with giving anyone anything: they come to expect it. And when you change it, it had better clearly be for the better, or you're going to alienate far more people that you get on your side. You can read about that, and another great benefit at: Adobe: Beer Bash -- the idea was we had a great Beer Bash, and then the bean-counters got involved, and subsequently made it worse and worse, until they tried to kill it, and there was a cultural revolt that brought it back.

When you're paying $250K+/employee (with taxes, benefits, and bonus's), then going cheap-shit on something that costs less than one employee's Salary for 5,000+ person campus, is just not good business sense. But that doesn't stop executards from trying now and again. But this is the thing -- you have something good, and some people want to justify their existence by changing it. They have some rationalization for it, but in most companies there's only a 50/50 chance they'll make it better. In Adobe, that was about 5% chance they'd make it better. Whenever they changed something, it was going to make things worse.

One example was our snacks and sodas. Each floor had a kitchen, and the Kitchen had a fridge stocked with a bottle of Ocean Spray Cranberry and Orange Juice, and about 8 cans each of 10 different kinds of sodas -- and a shelf of bottled water. I love bottled water -- mostly because I drink water, and like having things that don't spill. There was also a candy jar, that had some almonds, trail mix, small candy bars, and the scourge of the candy jar: dried cranberry's. Generally, the drinks would dwindle by closing time, but usually a few of everything left, and the candy jar would end up empty, except for those tart little bags of nasty (the dreaded cranberry's). But life was good: so it had to be fixed.

Facilities decided that we wanted to be more environmentally friendly. We were already LEEDS certified and a few other things that the enviro-loons love. But if a little is good, more is better: like waterboarding. So they fixed it.

They took away the water bottles as part of the progressive cultural purges of 2010 or so. The idea was plastic is a bad thing, so they'd go to more environmentally conscious tap-water and super-duper charcoal+reverse osmosis filters. And they gave everyone exercise Water Bottles. This is typical bean-counter dumb-fuckery -- if anyone had done a lick of research, they would have known that reverse osmosis filters are about 5-15% efficient. For each gallon you drink, you pour 7-20 gallons of water down the drain (to get rid of the particulates, etc). Not to mention power for the UV filters, and so on. Our power and water consumption went way up, in the name of political correctness. But it's OK, everything else got worse too.

Normally, I grabbed a water bottle in the morning, and reuse it multiple times. (I didn't care about refilling from one of the water fountains). You'd take it meeting to meeting, and be fine. But if you forgot it, or it had been a few days, you threw it away and got a new one. With the new system, you lost your water bottle in week-1, and now used paper cups. They didn't give you intelligently sized paper cups in San Jose (only in SF) -- so you used 2, and double fisted the little things. Then you went to meetings, where you tried not to knock them over and take out the table or a computer (sometimes to poor effect). But my paper and water consumption both went up 10x. So it wasn't the slightest bit greener. In fact, when people get stupid -- I get passive aggressive. I made sure to throw away my paper cups after every use. If they cared about my paper consumption, they would just give me back my plastic water bottles. And the water purifiers broke, all the time -- so there was constant complaints and support. Not to mention the increase in calls to our tech support with spills in the keyboards. It was a disaster -- so they never retreated and went back to the cheaper and preferred system that we had before.

Coffee makers went through a similar migration. They replaced delivery of packages and make your own -- which people generally managed quite well with the simple red pot, green pot systems (normal or unleaded/decaf) -- with a new pour beans in the top, press the touchscreen 27 times to make your order, then wait 3 minutes while it grinded, pressed, took a coffee break, then came back and poured hot water through the beans and gave you your mediocre coffee, while everyone else was waiting for their turn. These expensive and fragile makers seemed to break-down a lot, and while they had a nice screen, they couldn't do basic things. They could make all sorts of latté's and the like.... but I like a decaf mocha. It could make a leaded mocha, but not a decaf. (That was beyond the programmers ability to add a button). So I had to make two cups -- one of cocoa, one of decaf, mix them back and forth, and throw away the excess, since no one else wanted 3/4ths of a cup of decaf mocha. Highly wasteful, but if they wanted it to be efficient, they would have designed for it.

Because the new coffee makers were such shit, they put in a few coffee stations (one in each cafeteria) -- so now you could go down and pay Starbucks prices, for McDonald's quality. OK, that's a little unfair. They actually did make pretty good coffees if you went down, and they generally got your order and name right. And the Americano's (e.g. straight coffee's) were kept filled and were free, and those ones were pretty good too. So I found it better than Starbucks. But if you wanted a coffee, it went from a quick walk to the floor kitchen and bring it back to your desk to work, to a 10 floor elevator ride, walk, wait in line, sit, drink it down, probably chat with others, then trek back to office, and realize you just lost half an hour (and $6.00) for what used to take 5 minutes and be free. Thanks.

They went from a basket of snacks (which included fruit wraps, some fruit, assorted chips and granola bars, and so on) -- to a candy jar. Claiming the new snacks in there were healthier, because one of the new baby sized bags was (trail mix). The others weren't really better. And they took away the fruit wraps, so enough people complained that they added fruit back to the fridge. Which was usually a few banana's (that were gone by 9:00am), some Apple's (gone by noon), and a bunch of Oranges (that were less loved than the bags of dried cranberry's). Since I come in early, and could poach a banana, things weren't too bad. Sucked to be one of the late risers.

And the containers went from generally being large enough to have stuff all day, to (if you were on a fairly busy floor) it would last until about lunch before it was pretty scarce (nothing but cranberries), and by afternoon, you had to scavenge on less populated floors if you wanted something. Again, the trekking wastes time. And in the spirit of progressive fascism, they took out the few vending machines they had, where you could buy chips or crap. Fuck you food-nazi's!

Well, it was annoying.... but it was free. So you can't complain too much, though people did. And many teams rectified the situation by spending their own budget, and keeping their own stash of snacks for THEIR people: with friendly signs saying things like, "Photoshop Only!" to stop the vultures and interns (hard to tell them apart) from eating all the snacks.

Thus, it had been another 5 or 8 years, so they did it again. This time they put out four square bowls, and said "new healthier snacks". They're healthier because for a floor of 150 people, they had like 6 bags of pop chips, 6 bags of popcorn, 8x Giradelli's chocolate squares, and about 6 sized Hind (Granola) bars -- if I got in by 9:00am, there might be one or two scraps left, which I'd squirrel away to my cube -- but by 9:15 the cupboards were bear. About 1 month into the transition someone asked, "they put out those bowls saying good snacks are coming, but when are they going to transition". I had to explain they had on day-1, just if you aren't in there by 9:15am, you get nothing.

Also in there, they used to have free dinner (cafeteria style) if you were there until 6:30pm. Many of the younger bachelor types would work like 10:00am to like 8:00pm because they'd stay for the free dinner (which was almost always Indian or Mexican food). But that got killed in one of these "making things better" purges.

In the end, this might sound like a lot of bitching -- but I like the company, and like what I do. I look forward to work (mostly). And we win awards as one of the great places to work: some deserved, some over-hyped. But they did once have a lot of programs to show they cared. And not many companies or people in the world get free snacks at all. But half-assing it, and taking things away over time, is a way to alienate your employees. They deal with work burn out, magnified by knowing the longer they stay, the worse everything will get. Adobe seemed to have a full time staff, that was constantly on the hunt for anything that was working, so they could make it worse. From changing from private offices to open floor-plans, from having a formal vacation policy to a less formal one (no accrued sick/holidays), from ruining beer bash, or to fucking with people's snack and soda benefit. The perpetual entropy of free snacks was an symptom of that -- but it was an example of Adobe's incredible ability to be penny wise, and pound foolish.