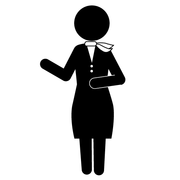 My wife became an airline attendant. This is actually an interesting move for a social worker and teacher. She'd been waitressing part time, and generally enjoyed the job and working with people, and is really good at it, and the flying opportunity appealed to her. And I think there's a lot in common with working with kids, or people that have problems in their lives, to people who are in a plane. So when Continental (now United) called her, and let her know she made the program, she jumped at the chance. (She's working for the express division).

My wife got to (had to) fly down to Houston for training, and 5 weeks is an annoyingly long time in a hotel and away from home (for both of us). Even longer in Houston, no offense to people living there but Iíve never liked that town; hot, muggy, smelly, Houston is the armpit of America. Of course my wife did great, and had a good time. It is interesting learning how much that flight attendants have to know. Memorizing all the FAA rules and regulations, airline procedures, specifics about airplane models, seating, airport codes and those wonderful little things they recite (about exiting the aircraft and various emergency procedures). She is quick, and dedicated, and so had a much less difficult time than many.

Interestingly, 20 odd years ago, the requirements for flight attendants was being like 22 years old, certain height and weight requirements, and so on. It was a very sexist industry. Now days, it turns out that many any attendants are more mature, and many making mid-life career changes. This actually makes sense, as they seem more stable, and excuse my pun, but less "flighty" than some 22 year old girls can be. So I prefer the shift from hiring based on their sex appeal alone to hiring them because they are competent and reliable (though I still think my wife has plenty of appeal).

People are funny; and one very important life lesson that can be learned is how you deal with the public (or some people). If you argue with a person that you canít get 10 pounds of crap in a 5 pound bag, they will argue you to death and get mad at you for trying to educate them on physics. But if you just let them learn the hard way, it seems to work better. Quite often people come in with bags that arenít possibly going to fit in the overhead bins (or under seats), and the solution is to mention it once; and when they argue, say, ìGo ahead and tryî. After 5 minutes of wrestling with trying to cram the square peg in the round hole, theyíll eventually come back and let the bag be checked. If you let them learn on their own, they are less likely to get mad at the airline (or attendant) than if you expend too much effort telling them what they donít want to hear. I actually feel a lot of people could learn a lot from that lesson; of stepping back and just letting people learn on their own, instead of controlling (even if they think it is for their own good). Iíve seen too many managers, parents, or others, try to tell people way too much, and fight way too long trying to ìwinî some argument and explain to people what theyíll eventually learn on their own if you just give them a chance.

There are, of course, many stories that working with the public always entails.

So far the most bizarre story that I heard was from another attendant.

There was a lady that had a pet (cat) on board under her seat. (There are a lot of regulations about pets on planes, by the way). Anyways, the cat was mewing and generally not happy. The lady had taken the cat out and was holding it. When the attendant noticed, she went to the lady and told her the usual, ìthat the pet must be in the carrier at all timesî, but she got a major shock when she noticed that the lady was breast feeding her cat. The lady noticed the look on the attendants face, and explained, ìit calms the cat downî. But Iím sure all sorts of things were flashing through the attendants mind, like ìhow did you find that outî, or ìso whatî? Either way the cat had to go back in the carrier, but the attendant probably needs counseling (not to mention that passenger, or the aghast passengers around that had also noticed but where trying their best not to have noticed and go fully into denial). Societal norms mandate such silly things that breast-feeding (babies) should be done in private and so on. I donít always under the rules, nor agree with them. But I am amazed that there are people out there that not only donít get them, but fail to get them by so much that they somehow think that breast feeding pets in a public place is OK.

My wife's worst problem (so far) was just with security. Sheís had heart surgery and sometimes the metal rings (holding her sternum together) can set off the metal detector (at least in Shreveport, Louisiana). The hand wands quickly determine where the metal is, and no big. However, one aggressive security guy said he had to check for ìmetal under-wiresî in her bra, which my wife explained were plastic, but he proceeded to feel her up. She knows the difference between feeling for a wire (on the side or bottom) and full on groping, so she complained. Turns out, complaining (even as staff) is a ìbad thingî and they were soon searching her and her luggage and generally holding up both her, the line, and the entire plane (she was with the pilot). Nice to know that security is checking breasts of patrons to make sure they arenít smuggling anything dangerous in there.

Either way, my wife (and me, by proxy) are now airline/travel industry insiders. With all the perks that entails; see very few (other than some discounts on travel). But hearing tales about others (who are attendants or pilots), and their humanity actually amuses me. Stories like the attendant who took 10 tries to pass her exams (thatís confidence building). Or just trying to talk to my wife on the cell-phone between flights, over all the noise; and the noise isnít the airplane or loading noise, but is instead the pilot blaring the Dave Matthews Band over the sound system (once all the passengers are off), and turning a multi-million dollar airplane into his own bass thumping little boom-box. What else are you going to do when stuck in a cockpit waiting around for your next hop? So why not rock-out and annoy the rest of the crew? Airlines want to keep pilots (and crew) at a distance, so that you donít see their humanity (and thus respect them more), but I think it is good to realize that people are people, and that you respect them for their training anyway.

So far, this adventure has been educational for my wife, and for me as well. Hopefully this article will amuse you, and make you think just a little differently about travel, and think a little more about the people behind the counters, behind the wheel (yoke), or in the aisles. And if you meet my wife in the skies, I suggest you don't check her breasts for metal weapons; she hates that.