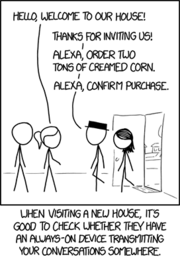 Who doesn't want an always on, listening device in their home? 1984 (Orwell) creeped us out by the idea of TV's that listened and Governments that monitored for political correctness -- Amazon marketed it. The problem is without regulation, and little trust of Amazon protecting our privacy, there's valid concerns about what MIGHT be done.

Here's an example of a design security flaw where folks who make a "skill", can allow Alexa to listen forever.

Sure, it'll listen in.... but you can order things you see on informercials, mindlessly, without having to shop for the best value or press a few buttons.

Throw on top that Alexa has a raging leftist bias, or that she won't answer if you talk to her rude/sexist, then how long until she starts lecturing and indoctrinating people, while monitoring them for truthiness? Amazon might be winning the voice agent wars because they're getting it everywhere, and aggressively improving it. But I'm still concerned about Amazon's snooping, more than Google or Apple. (But less than Facebook, Twitter, or many others).