There are really two different histories of America -- the one that I know existed based on extensive reading and studying of history, and the one that some of my left of center friends know by repeating what they were taught in School/Universities, what they read in their version of the media, or what they really want to believe, despite all evidence to the contrary. Without someone having an accurate understanding of the past, they have a distorted view of the present, and no ability to understand what's coming in the future. Which explains how they can demand such ruinous things with the glee of a cult follower reaching for their glass of flavor aid. Thus our realities will only occasionally intersect, and when they do, it's usually not a great reaction.

My world view was formed early with things like in the 5th Grade while studying The American Revolution, I found out that what my teachers were teaching me was far from the whole truth: it had lies of omission and commission, and that if I wanted to really know something, I had to become a critical thinker: skeptical of what I was told, and to dive in a research what they weren't telling me. Lefties never got that memo, and will vehemently defend their fiction against any and all documented proof to the contrary. They hated me in school for arguing with the teacher, especially when I won, and it hasn't gotten better with age or social media. Mere facts, books, pictures or video just makes them madder. While learning something new is exciting to me, for them, conceding their heroes were wrong is ripping the foundation of their reality away. So while they demanded we speak truth to power, they didn't mean we speak actual truth to actual power. Their ego needs a flock, a safe space and their fake truth -- while mine needs the freedom to question, learn and accept facts that matched the data before my eyes. All my world view offers them is a dark and scary world with doubt, growth and enlightenment. This article is just a few examples where our realities collide.

Here's just a small sampling of the lies they believe or re-tell. The biggest problem isn't just that they're wrong on all of them, it's that they can't admit they're wrong on any of them. You can show the facts, evidence, sometimes picture/documents and video -- and the most common response is to appeal to authority ("but so-and-so disagrees"), or to attack the messenger (and ignore the source material that proves it).

There's real science, and the left's version of it -- they often have very little in common. Very little. Of course both sides have selective views of things, but you can reason with the right on many of them. Many on the left are more like tantruming toddlers, and everything is their most sacred belief, if you question what they were told to think in the name of individualism and tolerance. 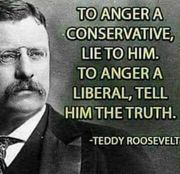 My life was always doubting: my parents, teachers the media -- and finding out what else was out there. Not conspiracies, most of those are implausible and unlikely, but just curiosity about the context, nuance and most of all the omissions.

Some need to believe that my criticisms of the left are because I'm just a fan of the right -- but it's more the opposite: the more I learned about what the left wasn't telling me, the more I learned to distrust them. The more I challenged both side, the worse the left behaved. The right spins and exaggerates too, but is less prone to lies, more prone to being called on them by the media when they do, and more willing to concede when caught and challenged. For me, you're only a useful being when you're self aware and can question or think for yourself. And the latest term for many of the most vocal left is NPC. In computer games a NPC (non-player characters) are pre-programmed, can't adapt to new information, and react in a very predictable and scripted ways: simplistic shadows of real players who can think for themselves. It's a bit harsh, many lefties are quite smart and reasonable on other topics, but we all have blind spots... and politics is it for those put their hearts above their heads, or feels over thinks.

I am a classical liberal/leftist (pro-individual liberty), that has become the right wing of America. The smallest minority is an individual... and individualists don't fit into the American-Left any more. So I was driven out and attacked. But I don't hate/resent them. I think deep down they know if they learn/grow/change on any issue, they could lose much/most of their social circles, and would have to re-think their entire identity. So they can't admit to anything, or they could lose everything. That to me is sad. But many of them won't learn, and I can't unlearn.