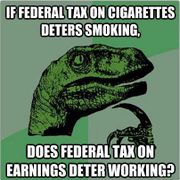 One of the thing that helps the pro-smoking argument was the dishonesty of the anti-Smokers:

Picking on one group, because you perceive their vice (smoking) as worse than yours (diet, excercise, hobbies, environment, carreer, lifestyle, travel, etc.) is what I am really looking at. If we are going to start this (helping people by taking their freedoms), then we WILL continue with it... and before you know it we will have a benign version of 1984 where we just tax all activities that either is not politically correct or may be harmful to someone, somewhere. Not my version of utopia, and not a precendent I want to go any further