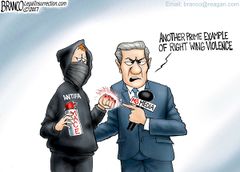 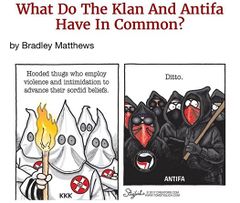 Antifascism is just fascism by another name

Violence is always justified (or rationalized) by the far left. Remember, Antifa is celebrated by Democrat politicians and the media, this is who they support:

Who were fascists? They wore black shirts and shut down their political enemies through violence and intimidation. And what do the antifascists do? The same thing under the guise of going after the true fascists.

Antifa was behind violence in Charlottesville:

Some people infer that if you're saying antifa is responsible for being asshats, that you're excusing the other side (who might be real nazi's, or just imagined ones). But that's not how the world works. I can think two groups of fascists fighting are both fascists, and be against them both. e.g. just because I think the Crips started a gangland war, doesn't mean I think the Bloods are innocent or good guys.

This is a pedantic look at antifa, and pretty good article, but not the complete story as it omits that they've been organizing BLM and others to come to their event. And there's many other groups that associate with Antifa -- so looking at the history of one of the groups is like looking at only one chapter of the KKK and ignoring all the others that did things that belonged to other chapters, related organizations, or came to their gatherings without being members. That's part of the story, but not the complete story.

Not sure I like the gloating tone about someone else's misery, but "experience is what you get, when you didn't get what you wanted". She learned through experience -- and the best thing we can do, is share her story to others, to try to help them avoid the pain and suffering that often afflicts the naive and stupid:

The enemy of your enemy, might not be your friend. e.g. just because fascists are bad, doesn't make anti-fascists and thugs any less bad (or their victims, any less worthy of protection under the law):