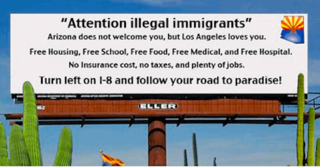 In 2010 the Obama Administration was violating immigration law, the Constitution, and the oath of office, by ignoring or being lax on immigration. So Arizona passed a law that said they should enforce federal law (that the Obama administration wouldn't), called SB-1070. Democrats and Californian's lost their nut... how dare a state enforce federal law, they said. They called it racist, sexist, xenophovic and homophobic, along with other words they obviously don't know the meaning of.... only California had the same law on their books.

Body of the law

This Arizona law is horribly racist for saying exactly what the federal law says about asking for papers. Look at this racism:

Oh wait, my mistake, that's not Arizona's SB 1070, that's 90 Section 834b in the California Penal Code [1]. It's easy to get them confused, as it reads almost exactly like Arizona's law. But that didn't stop the hypocrites in California from screaming that Arizonan's were all bigots for enforcing federal laws, or the same law that California had on their own books. And the left-stream media did nothing to educate the Californian's on their hypocrisy.