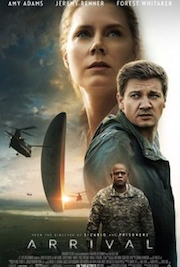 A good but slow “first contact” sci-fi thriller, written about a cunning linguist who slowly discovers how to communicate with aliens.

It’s traditional harder core sci fi, in that it’s very cerebral, and leaves a lot to the imagination, with a large helping of “what does this mean”, instead of more gosh things like actions or answers. The viewer will have questions, and possibly an interest in watching it again, just to catch the details and nuances they slept through the first time. As well as spurring conversations, “do you think this meant this, or that?”

The movies style is very first person, and doesn’t explain a lot as you go — you have to let them leak reveals in dribs and drabs, which plays well for the story. The suspense is mostly in the little things, with a few bigger reveals as you go. Meaning some people will really appreciate this style of antici…. pation and pa…. tience. It gets there, but it’s certainly no Independence Day or Aliens action sci-fi film. Think more Close Encounters as opposed to Star Wars. There was some Hollywood clichéd stereotyping, with the military guys being shoot first (“let’s nuke em”) types. But the larger arch of the story, and the other details and nuances made up for it.

That being said, I really liked the movie (even if it isn’t for everyone), despite a little dragging in the beginning — it makes you think about the world with new appreciation. So it was one of the better movies of the year for me. And the Rotten Tomatoes gave it a 93%/82% (audience/reviewer) — which makes perfect sense. If you look at it as a reviewer and as the art of story telling, it was exceptional. For pure entertainment, it won’t be everyone’s cup of tea — but if you like Early Grey, you’ll be immensely satisfied.