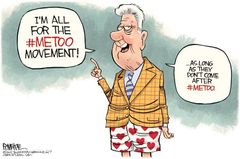 Asia Argento demonstrates everything that's wrong with Hollywood (and the larger SJW Entertainment industry), with her sanctimonious hypocritical speech. She calls out Harvey for "rape" on something she willfully participated in and blames everyone else for allowing it to happen after she didn't lift a finger to report or stop it, and the truly clueless will call her brave for coming forward (after everyone else gave her cover), and for being a Woman's advocate after sucking dick in exchange for career advancement -- and only coming forward after she allowed the abuse to continue for 25 years. There's a word for what she is, and it isn't "hero".

Not a bad call out, from a chickenshit actress that did nothing for 25 years, and let some obnoxious perv molest hundreds of other women. She will be praised for bravery, while hiding behind hundreds of others that had to come forward first, and said nothing because it furthered her career to remain silent.

I have NO problem treating the latter like abusive opportunist asshats. But I do have a problem with treating the former like heroes, or pretending they weren’t as scummy as the other side of the faustian bargain. Both were equally amoral to me.

The same hypocrites who were fine with the deal, when it helped them... are now coming forward, when there’s no risk/cost and only benefit from coming forward, making sensational and unverifiable claims — not in a court of law.... but in the court of public opinion (especially the most gullible).

Any Woman/actress/etc, that stood up and took a chance BEFORE the others, or did so knowing what it would cost her, is a hero and deserves praise. They brought charges before #metoo, and they have my deepest respect as ethical human beings that did the right thing, when there was little upside for them (only those who might follow them).

But ones like this, preaching to the choir, only from the safety of a far left award show cult, where there’s no risk and will only get sympathy and reward for their virtue signaling, and possible exaggerations and scorn — decades after trading their bodies and silence for fame? I’m more likely to flip between pity, disgust and contempt. You go get em you cardboard hero.... but I’ll save my praise for the ones that took risks when it mattered, not piled on with a mob when it didn’t.

So Harvey may be a douche, and I have no sympathy for his plight. But so is some person I don’t know, who facilitated it.... and still won’t name names and will play the hero or victim (instead of participant and perpetrator), only from the safety of an award show, and as long as she doesn’t have to risk anything to do it.

I had a friend imply that my point was either you report it "the day after, or never?". And the answer is, no. Of course people can come up later. Just don't pretend they're a hero for waiting. We should be able to agree that waiting 25+ year, after having multiple other consensual encounters with Harvey, and letting it happen to other victims.... what she now calls rape (earlier was coerced but not forced oral sex)... and only coming out after many others had, that she is no hero? That was my point. Not that she doesn’t have a grievance, but that if you kept your silence all that time (for personal benefit) that you’re not a hero, but an enabler or participant.

I went back and checked on the timeline: the first wave of metoo broke, then after the first wave of the Weinstein stuff broke, then Asia was named in the New Yorker (which was more one of MANY in the crowd, in the 3rd wave). So I wouldn’t call her a hero, pioneer or risk taker. She was one that benefited and came forward only after the potential benefits had ended.

So yes, women can and should come forward... sometimes decades later. But if you get too sanctimonious, your hypocrisy will splatter.

All that, I could respect the crap out of. Introspection, admission, regret. That 25 years later is a lesson to others about what she learned. But Asia did none of that, and was blaming everyone else except herself, for something she participated in. But if you cover for the rapist, that doesn’t make the rapist a good person... but it doesn't make her a good person or hero either. Especially knowing that her silence, meant more victims. And if you misstate something you willingly participated in at the time as rape, because you regret it minutes, days or decades later, then you're just a dishonest liar trying to ruin someone else over your mistake, not some hero. Unless feminist hero's should all be vindictive man-hating liars/exaggerators. She not only didn’t report it, but went back for seconds and thirds... and now that he can’t advance her career any more, NOW she wants to tell everyone what a bastard he was. Color me unimpressed.

She sexually assaulted and an underage co-star (Jimmy Bennett) when he was 17 (they had done a movie "The Heart Is Deceitful Above All Things" back when he was 7), and paid him off $380K for his silence, all while she was the throws of her hate-shade against Harvey Weinstein, for coercing her, as she had done to Jimmy. This doesn't make Harvey a saint, by any means, but it does point out that making him the scapegoat for a systemic problem is a bit ironic. Hollywood is full of hypocrisy, lies, objectifying people, and so on -- and it runs far deeper and wider than a single scumbag. Usually the loudest voices, are also the most guilty and trying to distract from their own wrongdoing -- while lecturing everyone else, on their moral failings, to avoid culpability for their own. [1] Her friend (Rose McGowan) was a flame-flanner and co-creator of the #metoo conspiracy, and while shaming Harvey and any other man accused during the early phases of #metoo, suddenly, changed her tune, and was suddenly claiming we might not know all the facts, and should wait before public convictions -- a courtesy she never extended to those who weren't her friends. [2]

Her response to this was victim shaming, something the #metoo movement would crucify, if it isn't one of their own doing it. [3] Then she denied ANYTHING happened, she'd never touched the guy, it was pure extortion, and besides, it was Anthony Bordaine (her Boyfriend) that had paid the hush money because he felt pity on the guy. Oh, then pictures of her in bed with the victim, and texts where she admitted to having sex with him appear.[4] Ooops. Who are you going to believe, your own eyes, or her?

Of course we don't know which side of the story is true, or both. We just know that if this was a white republican male that got caught doing that, the #metoo folks like Asia and the media, would demand that the assaulter be publicly lynched and destroyed, before there was a trial, discovery, or any proof of accuracy in the claim. And therein lies the problem with witch-hunts, assuming one side is always in the right, isn't going to work out well when you're on the other side of baseless and unproven accusations. So I'm sort of hoping for her public crucification, to serve as a warning to those calling for the rule of mob, over the rule of law. It will bite you in the ass. And if they don't do that to her, then they prove that they have no moral high ground, they're just man-hating far-left hypocrites.

The point is not to deny there are assholes out there, that will exploit Women (or Children) in Hollywood, there are. There are bad people, and if the women filed complaints about them, then should be convicted to the full extent of the law. But we shouldn't automatically assume that every claim is true. Historically, something like 10% of rape accusations turn out to be false. And I have no reason to believe that number goes down when you have the media fanning the attention flames and you don't have to go to court (only convince a pity party that you're a victim, and give them your gofundme page). To me, public lynchings and career destruction in the court of public opinion, is wrong. It does not make us a better or more tolerant society. And Asia (and Rose) just became the poster children for hypocrisy. She should apologize, and/or get burned on the same pyre that she and her followers built for everyone else.

So victims, can come forward later -- and they should be able to without victim shaming. But if it is too far, and only piling on someone that has already fallen — it might be vindictive justice, and taking her pound of flesh... but that’s not some big noble cause (as she sort of pretends, or that’s how her lecture comes across). Nowhere in there do I her admit regret, or apologize to the victims she let have the same thing happen to, by not warning them.