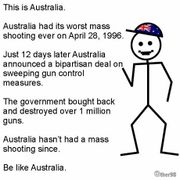 While FakeNews outlets (such as USA Today) promote the fallacy that since Australia violated everyone's civil liberties and got rid of guns, that the place is a utopia (no more mass murders). Of course we know the basics of their crime/murder rates, versus the states, and what a fallacy that is. (Their crime/murders dropped less than the U.S. over the same time, and they have more guns than ever in that country: just now all most of them are illegal). This article just focuses on Australian Mass murders -- and that things aren't all ice-cream and lollypops in the land of Oz, and those places omitting their murder-by-fire, or many shootings (or omitting that their trends have gotten worse, not better) are propagandists and not news agencies. Below is just a sampling. 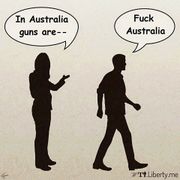