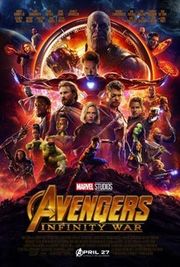 Infinity War is a superhero film based on the Marvel's superhero team the Avengers. It's either really pretty good or pretty bad, depending on how many of the other 19 Marvel films (and TV shows), you've seen. I'm glad I saw it, my wife felt completely ripped off: she hadn't seen all the other Marvel films, and was constantly, "who is that", "what's that ability", "why isn't Cap'n America in Red, White and Blue", and so on. And it was a 2 1/2 hour long continuous fight scene, with a couple separate simultaneous adventures thrown in... but the graphics, visuals, fights, and so on were glorious. One of the most expensive films ever made (≈$400M), it's really part 1 of a 2 part epic, which you figure out at the rather abrupt end.

If you know superhero canon (authoritative scripture), and want to see the greater story arc, it's really pretty good. If you're going to see a single super-hero movie, save your money and see one that is a less tangled web of 100 intersecting plot-lines.

Not really spoilers, but if you read on, there are some minor reveals.

Basic plot, after destruction of Asgard, Thanos (a titan/demigod) is running around collecting "infinity" stones: 6 crystals from when the universe was created, each gives control over a different aspect of reality. His ultimate goal is to prevent Malthusian Catastrophy (overpopulation), by putting the power crystals in his love-glove (Magic Guantlet) so he can kill half of the Universe's population (at random), and make things a lot better for the rest of us. And of course the good guys want to stop that.

The problem is ensemble films is that there's zero time for character development. The larger the cast, the less screen time for any one character. This movie had all of them. Basically, if you've heard of a Marvel super-hero, they were in it: Guardians of the Galaxy, Iron Man, Thor, Loki, Hulk, Captain America, Spider Boy, Black Widow, Doctor Strange, Scarlet Witch, War Machine, Black Panther, Vision, Falcon, Bucky Barnes / Winter Soldier, Red Skull, and so on. If there was a Super Hero you liked, they'll be on-screen and off-screen, before you can clap. No one has time for anything except a couple cliche'd lines, and fight scene gimmicks. Following it was a mess, it made a Jason Borne or Mission Impossible film seem sedate in pacing.

Despite it's 84/93 rotten tomatoes reviews, it wasn't that good. I suspect the reviewers and people seeing it initially, had seen all the other Marvel Films so were able to follow things much better than the average watcher will. They did squeak a little plot in there, and were not afraid to sacrifice a few characters to the story arc. And of course a few one-liners and character you like are always good for a 15 second chuckle, but if you pause to enjoy it, you'll have missed 3 other things.