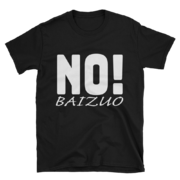 Chinese slur "Baizuo" (白左) sprung up in 2015, and literally means "White lefty", but there's some undertones in the characters that imply "privileged" or "stupid" with the first character, and "extreme" with the second. When Chinese Socialists think the western left is too bat-shit crazy and left-extreme for them, that says something.

The left tries to imply that it's a racial slur to distract or minimize the intent (their "everything I don't like is racism" defense), but while the slur fits a lot of Europeans and North Americans, the Chinese often use it against the Chinese petite bourgeoisie (foreign educated lefties) as well (more towards ABC's: American Born Chinese): it's more a slur against Wester University Orthodoxy (the ideology) than skin color.

It's popular enough term that it's starting to generate memes.

It is often about hypocrisy.

And so on. It's all about the double whammy of having a view, without thinking it through. Basically, if you regurgitate what you were taught in a Western College (Politically Correct Marxism), or something that's dumb, hypocritical, applies a double-standard, and so on, then this targets you.

Another term used along side Baizuo is shengmu (圣母) – literally the ‘holy mother’ – which refers to ‘overemotional’, ‘hypocritical’ and ‘have too much empathy’.

First applied to Angela Merkel (and her immigration policies). People who exemplified these traits (and were first targeted with the terms) were figures such as J. K. Rowling, George Clooney, Angela Merkel, Emma Watson, but also volunteers, social workers and all other ordinary citizens, who were a little too vocal in their hypocritical, "save the world", lectures.