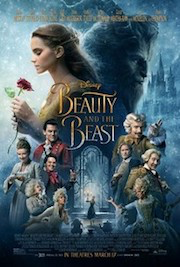 My wife’s birthday, and she wanted to see Beauty and the Beast, though I wanted to go too: the live action version of an animated classic was sort of on the must see list. It did not disappoint.

It got a 71% by reviewers on Rotten Tomatoes but 85% viewer scores, and the reason both were that low is likely that the snowflakes were melting over traditional gender roles, and others got bent over some gay references. Puhlease. The gay stuff felt more like Bugs Bunny Cartoon gags (with guys in drag and fluttering eyelashes, than Brokeback mountain). And it’s a classic Disney fairytale, trying to stay as true to the original as possible: so lighten up Francis.

The live action version follows very true to the animated version, with the same memorable songs (brilliantly sung), fascinating scenery and CGI that was wonderfully good and believable (the “wolves” were the least realistic of the effects). All the characters felt well cast, and well acted (in an over the top, shallow/cartoon character sort of way), and I was often impressed at how true to the animated version it all felt.

This movie tries to be a bit more adult in a few areas, and fills in a bit more of the backstory than the animated versions, and the live action scenery makes it run longer: 45 minutes longer (at 129 minutes). I liked the added backstory, and character development. The animated version didn’t spend the time to make Belle falling in love with the Beast believable (just inevitable), and this filled in that storyline, as well as her mothers, in ways that was probably completely unnecessary for kids, but helped with the plot, even if it hurt with the pacing.

In a couple ways it felt too long. Not that I was bored (though I did check my watch once or twice), it was just kids play the cartoon version and can be repeatedly entertained at 90 minutes, but at 2:10 seems like it’s a bit much for that age groups attention span, to be a repeat player. Yet, we saw it on matinee, with a lot of kids, and there wasn’t much squirming or caterwauling, and most seemed perfectly enrapt with the longer format. So I might be wrong: it might just be that I knew the whole story, so was anticipating the next scene or song.

In the end, I thought it was brilliant. It looks like it’s opening to an record breaking weekend. It retold the story of an instant classic, in a new way, and worked for me. Yes, it’s a clichéd remake of the Frog Prince, and it plays completely predictable roles — but isn’t there still a place in the world for that, without every film having to have the Warrior Princess, or some politically correct way of telling girls they can be proud of anything they do except accepting traditional gender roles?