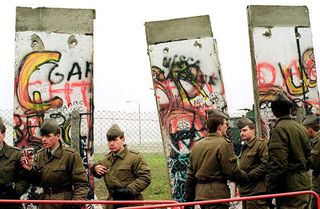 When thousands of people flooded through the checkpoints on the Berlin Wall, it was the end of an era. The years of a divided Germany were at an end, and the fall of the Soviet Union was not far behind. And it all happened because a man named Günter Schabowski made a mistake.

Schabowski was a spokesman for the Communist Party, and on November 9, 1989, he was handed a piece of paper announcing a major change. As a temporary measure, East Germans were going to get the right to visit the West, as long as they applied for permission and were approved. They would announce the start of the program at a later date.

The paper, though, did not make all of that clear. Schabowski read what it said, and to the audience, it sounded an awful lot like anyone with a passport could cross the Berlin Wall whenever they wanted. When one reporter asked when the new rule took effect, Schabowski scanned the paper, and not finding the answer, gave it his best guess: “Straight away.”

Thousands of people flooded the checkpoints, trying to cross over. The border guards, unsure what to do and unwilling to use force, ended up just letting them go through. The Berlin Wall was effectively gone, and the days of division between East and West Germany had come to an end.

Of course is makes sense that this ran in the NYT, anything else but giving Ronald Reagan credit for demanding that the wall come down, not backing down to bullies, and increasing military spending until the USSR collapsed under the weight of trying to keep up. Nor of all the people, protests, and other things that influenced it as well. Many among us are reasonable enough to recognize that if Schabowski had done nothing (or been more conservative in his reading of his orders) that the wall still would have fell in a few days or weeks anyways. The momentum was set, long before Schabowski's mistake. Or that the Soviet System of command hierarchy was likely to make this kind of mistake and inevitability.

But still, it's an amusing aside, and worthy thing to ponder.