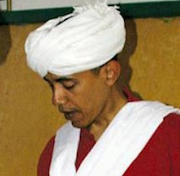 Recently Donald Trump re-ignited the birther campaign by saying the following, "Hillary Clinton and her campaign of 2008 started the birther controversy. I finished it...." This of course has revived the fable that the Obama birther movement didn't come from the Clinton campaign, and the Hillary-supporting media is quick to carry her campaigns' water. But as Ronald Reagan said, "It isn't so much that liberals are ignorant. It's just that they know so many things that aren't so."

A summary of what happened is that the desperate Clinton campaign was looking for things to attack Obama with in late 2007, and made it their campaign strategy to attack his "otherness" (not being American raised/educated, his foreign beliefs, and so on). They didn't start all of the rumors (some predated the campaign), but the Clinton campaign, supporters and operatives, threw everything that was anti-Obama that they could find at the wall, to see what would stick, and a lot of it did.

The media and Hillary supporters argue that since technically, some of these things existed in obscure forms (in seldom read dark corners of the Internet), that Hillary herself wasn't the creator of it... as if that makes her clean. But that ignores the practical reality that it was the Clinton campaign that pulled the birther rumors out of obscurity, weaponized them, and propagated them into public attention. Without her campaign, the Republicans and other Obama detractors, had much better things to go after Obama on than his birth certificate.

The modus operandi was, Hillary's campaign could popularize them, and then after they took hold, Hillary could get around to denying them in passive-aggressive ways (reverse compliments, "Obama's probably not a Muslim, as far as I know", "he probably doesn't abuse his kids, often", and so on). And the plausible deniability that the Clinton's are known for, gives the partisans and the fake-fact-checkers like Snopes, FactCheck and so on, the ability to distort the truth and imply she's completely innocent, or that those claiming she's guilty are completely false -- when they're more like 90% true, just slightly overstated. We can't prove that she was running her campaign (making the key decisions), but if all those folks were going rogue, then she was incompetent or at least attracted those kinds of dirtbags and liars to represent her. Which is worse?

The Press/Progressives also skip the part where all Obama had to do to end the conspiracy theory (or at least cut the legs out from under it), was get people his long form birth certificate and publish it in a competent way. If he hadn't allowed his close supporters to write exaggerated bios of him being some poor immigrant child from Kenya, and stuff like that, it wouldn't have been as much of a problem. Instead it took 4 years (until April 2011), and pressure from Trump and others, to get the administration to do that. And instead of a native scan that people could analyze, they put it through Adobe Acrobat scan compression that a funky layering compression (and OCR) on scans that made it look doctored, which started up another round of accusations. Then add to that some funky timing with key people dying, and a highly secretive administration (lots of questionable associations he doesn't want people looking into, and no one remembering him before Harvard), and you've got conspiracy smörgåsbord. This wasn't just loony conspiracy theorists, this was some really shady or incompetent stuff, and since the Press was proclaiming him to be the smartest man in the room, people went with shady.

Here's a quick reminder of the timeline and what we know:

Some absurd "fact checks" conclude the following degrees of falsehood:

It's only Republicans that should be held accountable for what their followers do, not Democrats.

All of these are embarrassing for the "fact checkers" credibility. If they wanted to be the slightest bit non-partisan, it would have been at least half true, and they would have explained that while Hilary or her campaign wasn't the only origin of the stories, they were gleefully spreading them and responsible for popularizing them from the very beginning. While we can't prove it was under Hillary's orders, if it wasn't, then she wasn't in control of her own campaign machine. The fact checkers might also correct the record and add new information as it came to light, but they prefer pointing to stale mistruths and dismissals, rather than admitting to facts that don't reflect well on their research. So readers are left missing a ton of context (called lies of omission).

Compare their versions to the historical record above: