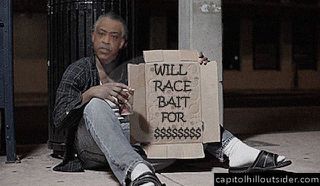 I'm not black, but my Step-Dad is black, I did live and work in black communities. What I saw as an outsider was the black community is disenfranchised (duh!), and that leads to distrust of the system, often Whites, and they prefer their gossip circles and communities opinions to News and fact... to the point that there are many more conspiracies. Events that go through that lens, don't often resemble what I saw, or the objective facts of the case. And the DNC either starts, fosters or panders to many of these wacky views of America or the world, feeding the hate/unrest for votes.

This paranoid separatism is quite different from Jews, Mormons, Asians, and other racial or cultural "disenfranchised" minorities in the U.S. -- who while they certainly complain about historical victimhood (and even present discrimination), seem much better able to separate fact from fiction, and more importantly, or at least understand the consequences of picking fights with the majority over these infrequent slights against them.

A few examples of this include;many conspiracy theories that are common, past current events, how wrong the "community" got the initial stories (and thus reactions), and their unwillingness to admit those mistakes, or any wrong in the reactions. From Rodney King and OJ, Gates, Eric Garner, Zimmerman / Trayvon, Michael Brown, Sandra Bland, and so on. There might be some valid policing problems buried in all the confluence of race baiting, but none of them seem to have a whiff of racism involved. Not because there isn't racism, but if these are the best examples you can come up with, then you don't hav emuch.

Until the media starts acting responsibly, and calling out the medias own failures as well as those in the black liberation theology (really black conspiracy theology), then we'll always have this division between the informed, and the democrats/black community. And when a minority pits itself against the majority, it tends to be the minority that suffers the most.

There's a lot of folks running around making a hobby or career looking for racism in everything, from Reverends Sharpton, Jeremiah Wright, Jesse Jackson and Minister Louis Farrakhan, to many amateurs and aspiring's participating in these movements. There are community organizations like Acorn, or Black Lives Matter front-groups funded by Democrat-Party Bundlers (George Soros, etc). Obama was even a "community organizer" with is code for fomenter of unrest for political gain. These folks exist to convince the ignorant, that everything is about race, and they need to give the politicians more power/votes, to take away other people's liberty/money, in order to fix the problems. E.g. they all preach hate and racism in order to cure the ills of hate and racism (by preying on the disenfranchised and often uneducated).

If you've lived in, or around, black communities, you should be familiar with many conspiracy theories about how the man/system was out to get black men, like:

The point of this is NOT to paint the black community as a bunch of loons. White, Asian and Hispanic communities all have their buckets of bat-shit crazy theories as well. But it is to set the tone. The black community, as any disenfranchised group, has a deep seething distrust of the system, at least some of that for valid reasons. But that leads to gullibility and over-reaction; made much worse when race hucksters prey on that gullibility for money and attention. It has lead to problems like the "no snitching" sub-culture, where reporting crimes, or helping the police eliminate the criminal element, is seen as a bad thing -- with the resulting increases in crimes in their own communities as a result. Not to mention herd retaliation against anyone that helps the police stop those crimes. As well as fostering a community where kids are more likely to join gangs to defend against, or seek retaliation (street justice) against, various threats and rivals.

So while it may not be the black communities fault, and fault is irrelevant to the point. The communities response, does make things worse for the community. You don't see White or Asian communities burning down and looting their local shops in protest over affirmative action, or the double standards when whites are killed by black police officers. Thus it's with this lens (filter), that we need to look at various "current events" (whether past or present), and how the media and communities respond.

If you think I'm making this up, here's a few examples of non racial events that became race crises because of the delusions and overreaction of the community:

We have real cases of racism (where some innocent black guy is dragged to death for being black), and so on. But these are EXTREMELY rare and infrequent, less frequent than in almost any other country in the world. What we have is a Press/Left with an active imagination, that is continually rewarded for turning non-events into big racial crimes. Then we have idiots with agendas climging out of the woodwork, and the press catering to them, to increase racial friction, while these fools claim that blacks are the only victims, or that things are getting worse.

Selectively ignoring how many whites may get shot for being in the wrong part of town after dark, or real statistics that show black men have 100 times more to fear from other black men, than they do from whites or cops. The press ignores that most of the violence problems in this nation are innerracial (and not interracial), and instead of trying to quell concerns, they fan the flames of racial animus (race riots bring good ratings).

Racism is just a false cry used to get attention or to shut down communication -- instead of as a tool to foster more communications. THAT is the biggest problem with racism in America. The more the black community isolates itself, and blames everyone else for problems within the community, or has a double-standards where 4,000+ black on black murders per year mean nothing, but 3 or 4 black deaths (of repeat violent felons_ are the problem? Thus the rational part of society will ignore that stupidity, the race hucksters will play that off to the conspiracy nuts and uninformed, and things will continue to get worse.