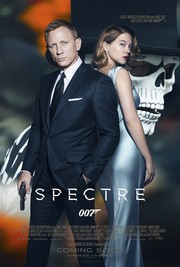 The movie got mixed reviews, with some reviewers whining that it was a nostalgic backslide with modern elements. Yeah, but that's not a bad thing at all. And most viewers were rating it higher than the reviewers. I'm with the viewers.

I've really enjoyed the Daniel Craig prequel-reboot Bond, they're more back to the basics, and cutting down on the Borne Identity hyper-frenetic action thing. Instead, trying to give you just a little backstory and depth of character, with a colder/darker story line. (What makes them who they are?) And for that, it worked fine.

This definitely wasn't the best of the recent 4, but it was probably in the middle of them. A little more dialog and backstory, and little less action than some. And still a bit over the top action sequences -- but without the complete absurdity that was losing me on the series during the 80's and 90's. More back to basics, darker, 60's bond.

It was still following the usual Bond recipe of loner getting tortured, killing bad guys, having chase scenes and getting laid (rinse and repeat), all while ordering a pussy drink, firing a pussy gun, driving great cars, and still making it look classy.

Still, it's Bond, and it all works for him. He's cool, drives great cars, kills the bad guys. You like him, and yet he's kind of a ruthless murderer with a bit of a self-destructive streak. This movie ties the old and new movies together, filled in a bunch of backstory, had a lot of action, and was really quite watchable (if a little long) -- assuming you have an attention span and some interest in the actual story arc, and not just kill-kill-hump-kill-kill. So I liked bringing back Spectre and setting up remakes. But if you like pure over-the-top wall-to-wall action, it'll be too long and too boring (which was many of the reviewers complaints).