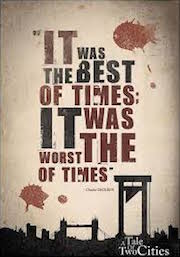 Whether you call it an Emergency Kit, Zombie or Bugout Bag, Prepper Pack, or SHTF (Shit Hits the Fan), it is all the same. Everyone should plan for contingencies, and the likelihood you'll need one is far more likely that you might think. So the question isn't whether you should have one (you're being sort of irresponsible if you don't), the question is more what fits your needs or expectations, and what is best to put in it.

Not just for crazies

A tale of two cities was written over 150 years ago, about what was happening 75 years earlier, but it could have easily been written about ancient Greece or modern Syria (or Paris after a mass shooting). Details change, but from the high level, it all looks the same. History repeats itself, and those who study history have to watch the slow motion replay.

The point isn't that we're living in a state of eminent threat or despair. From a macro view, we're living in a Golden Age. One of the best times to be alive as humans, with the least despair, most liberties, least wars, famine and diseases of ever before. And in the long term, there's no reason to believe the trend won't keep getting better. But least is not none, and there's also little doubt things could get worse (at least for a while), and that there's likely more bumps in the road to nirvana (just ask Kurt Cobain). Cultures cycle, generations forget, and fortune and misfortune seems to come in waves. We've had it pretty damn good for a while, even while people are selling the gullible that we have not.

So there's many reasons to be prepared. Whether you believe it's time for pestilence to rear it's ugly head, that progressives incessant efforts to destabilize and polarize humanity will finally succeed, or just that you live on a fault-line, flood zone, or semi-dormant volcanic area and think it might be a good idea to have some supplies on hand, that little voice is trying to tell you something. Trusting government to protect you is not a plan at all -- just ask Katrina (or many more recent crisis) Survivors, or go visit your DMV. That will hint strongly at what trusting others to take care of you will get.

FEMA tells you that you should keep a few months of supplies on hand, "just in case". The Mormon religion has reserves as part of their belief system (to help themselves and others). Government built bunkers and supplies for their leadership. But if you try to stockpile enough to survive a rough winter without a trip to the grocery store and pharmacy, and you're likely to end up on a government watch list. But to be fair, if you've lived a life worth living, you're probably on that list anyways.

But I'm not talking about building a bunker. Though sometimes I have dreams of moving to a cabin in the woods. (Usually when I'm stuck in traffic, or stuck on a plane with stupid people). I'm just talking about the light beer of survival rations (homeopathic prepping) -- it is to just have a kit to get you out of town, or to help you hunker down while in a bad situation.

NOTE: While I'm not talking about becoming an isolationism prepper, those people aren't all dumb/crazy. I think some might mis-assess some risks/threats. But when it comes to preparing, they've given it a lot of thought, and there's a lot you could learn from them. So I don't exactly "buy in", but I certainly think it's worth paying some attention to what they say -- and certainly what things you could do to make yourself more prepared.

Here's was a brilliant article titled, "The Surprisingly Solid Mathematical Case of the Tin Foil Hat Gun Prepper", where they actually look at the odds of you needing something like I'm talking about. They are grim. Countries seem to last an average of 100 years or so without major violence/instability/war, I lived through the L.A. riots (twice). And catastrophe's are a lot more frequent than that. I've had to bug-out of my house a few times because they used a grove behind our house as the firebreak, as well as had to drive out of Sonoma while the big fires hit in 2017 (driving by burning trees and large patches that were burnt out). And I've been through a dozen earthquakes, though none have done major damage to our house. The point is, if you live long enough, you are more likely to experience catastrophe than not.

No matter what you call it a Prepper Pack, Crash Kit, Zombie/Bugout Bag, or more mundane “Survival/Emergency Kit”, they’re not a bad idea. I was never a boy-scout (I was a cub-scout and weblos), but I do like their motto of "Be Prepared”.

We spend a couple thousand dollars a year on insurances that are rarely going to be used and can only help you financially after-the-fact, but few people spend a couple hundred dollars (one time cost) to setup a couple bags of necessities or conveniences that will be far more helpful during a crisis. StateFarm commercials aside, nobody is going to blink in and blink you out, to help during a disaster or even accident — so once again, self reliance and preparedness, is always a good idea.

People are inherently bad at doing the math. Think about the odds of something like, “100 year flood (earthquake, fire, hurricane or tornado, etc), means if I live for 80 years, then there’s an 80% chance that I’ll experience that?” Holy shit. Worse, if you live in an area where those things can overlap, they’re cumulative. So while any year having one of those things happen is extremely low — the idea that you’re going to at least one pretty shitty crisis in your life, is actually highly likely. Throw pestilence, car accidents, or other accidents, or just breakdowns in the middle of nowhere — and it’s probably more than a couple times in your life where you’ll think, “If only I had X".

I hope I’m done — but I’ve seen a few serious car accidents that I helped with, had a couple car accidents (and been hit by a car 4 times as a pedestrian), found a couple suicides, stopped a few crimes, had a couple fires force us to evacuate our homes, lived through a couple serious earthquakes (that were far enough away that our damage was minimal), been jumped, had a building next to me struck by a very mild tornado, and was one of a few thousand people in our region to hardly notice a significant regional power-grid failure, and so on. I’m getting too old for this shit, and am becoming more the home-body. But I’m also getting smart enough to be a little prepared, just in case. 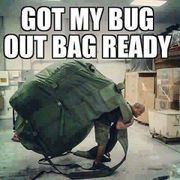 There are of course these easy to buy kits, that have a few basics, usually at inflated prices. And they are certainly better than nothing, so I wouldn’t discount them. If you want to do the minimum, then those are a minimum. But it really matters what you’re planning for.

My idea is plan for a variety of things (including some rare ones), and figure this is the cheapest insurance you’ll buy (amortized over how long you’ll have the kit). I suspect there will be many cases where just having one of the items at the right time, will pay for the entire thing in value returned.

Of course all of these inventories are quite personal, and Murphy is itching to teach you a lesson about items you might forget to add, or think, “nah, won’t ever need that”. But still, something is better than nothing.

I like to make a kit that contains many sub-kits, for different use-cases. (Yeah, I think of it like product management: define all the use cases, then create an MVP (Minimum viable product).

There's also different ideas in mobility: things that can get you to the woods to survive, or somewhere where the zombies aren't roaming the streets. If you've ever camped for long, you know that if you have shelter, you're probably better waiting it out there. But it turns out if the gas and electricity is off a while, and you can't trust the water as-is, then camping supplies are still damn handy. And if you keep a pack in the car, and have to walk 30 miles to get home (1-2 days), that a couple supplies might be nice.

In order of likelihood, you need a few kits in one:

I’ll go into details on what each of these my kit would contain below (and some of items I bought). But I tend to buy cheap, these are low likelihood use items. I found a dollar store is a brilliant way to buy a ton of cheap crap, that would be amazingly helpful if civilization ended (for a while, anyways).

Like all of these checklists, they're more a personal list of things you should keep around "just in case", thus they vary a lot because they're based on probability, comfort levels, and size considerations (how much shit you want to drag around). Most people keep layered kits. So a small one they can carry when hiking. A bigger one for the car. And another for the home. These aren't meant to be the definitive comprehensive be-all end-all list of everything. Just a few hints to get you thinking in the right direction, then you need to customize for things that will make you feel safer.

Remember the way odds work -- a 100 year flood is highly unlikely to happen any year you're alive. But if you live 75 years in the same place, it's more likely to happen than not. Risks are additive -- so you don't have to be paranoid to collect some things that will help mitigate them a little bit.

Priorities: the law of 3's - (I'm not arguing the validity, as I think some of these are a stretch -- but it's commonly quoted, so you should know it).

This is my list of things, yours may/should vary. If you can think about it, you might need it -- but you still have to prioritize based on location and mobility. Does this below on you at all times, in the back of your car/truck, or is this in a watertight container in your house (in case of disaster). I also have a laminated inventory sheet, so that it reminds you of what you have, and where.