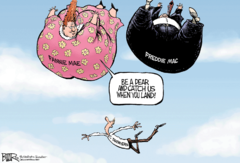 The idea of the CRA->Fannie/Freddie theory (CRAFFT) is as follows:

This is why politicians didn't attack commercial bankers: getting them on the stand would mean they would explain to the public what happened, and it would all point back to the politicians/government (democrats especially, as they controlled congress/senate). So they would demagogue that it was all their fault, but they wouldn’t give them the microphone of any high publicity trials to defend themselves. And the left-leaning media wasn’t going to let them explain how the business works.

Unlike the Glass-Steagall Theory, which only explains the parts of the problems the Democrats want to look at (with their usual scapegoating the evil banks and bankers for selling sub-prime loans), and allowing them to vilify the Republicans and lack of Regulations. This CRAFFT theory explains why the Bankers would do this (if it ultimately almost destroyed them), and also covers why the credit markets froze and how TARP (just loaning money to the banks) would help cure the problem. It fixed their debt-equity ratios, and that let them loan again.

The GST theory is great at pointing fingers at who (if you don't know how anything actually works, and aren't curious enough to ask). But it sure doesn't tell you the what, why, how like the CRAFFT theory does.