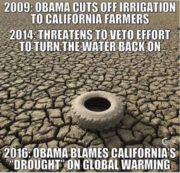 The way the media lies and says “80% of our water goes to agriculture", is they ignore the 99% of water that we don't capture, or the 46% of the captured water in the “catch and release” program (we just flush into the ocean). How much water do we flush? About 800K acre feet or 272,085,941,723 gallons each year, from Folsom alone, even in droughts (or especially in them). Enough for 12 toilet flushes per day, for EVERY person in the state, more than enough to supply L.A. and Bay area. And that's one lake/river.

Since Democrats took control of California the goal has been to reduce our electric capacity and water capacity by artificially constraining it, then using that water monopoly to raise prices and squeeze consumers. All the better because gullible liberals can be swayed by malthusian scares like, "OMG the water is running out". When the facts are we flushed enough last year out of one rivers to supply every city -- and that's not counting the 99% that we didn't capture.

We don't have a supply problem, we have a stupidity problem. If politicians fixed California's water problem (an easily solvable thing, as we let much more water go into the oceans than we capture), it would mean that we couldn't demonize and tax. Which is the point of all this, the politicians want to create the utopia of a water monopoly, so they sell the gullible on the fiction that there's not enough water to go around, and they need the government to protect and tax you.

We get the government we deserve -- and as long as we allow one party to have a monopoly on the state, we deserve this one.