California, or at least many counties in it, ignore the spirit and letter or the law with impunity. They pick who can get a CCW based on their political contributions, and not the worthiness of the application. The State Legislature will do nothing about this. They've lost and fought lawsuits over it, and don't seem to care about the rights of their civilians. 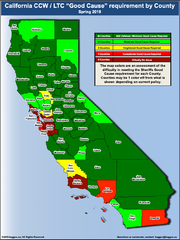 Chris Long wrote a story on his trials, but his is one among thousands. He just took the time to document it. A summary:

This is California in a nutshell: fuck the law, we do what we want.