From iGeek
(Redirected from Category:Atlantic)
Jump to: navigation, search 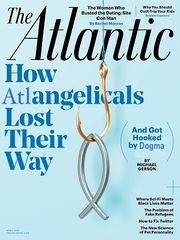 The Atlantic is a far-left Newspaper (not by ideology, just by bias), that occasionally lets a good article or two through, and even rarely has some diversity of thought. I had some hope when they hired the prolific conservative intellectual, Kevin Williamson, away from the National Review. But like so often happens in sheep flocks, they fired him for thoughtcrime of having once written a pro-life article -- while they defend authors that wrong complete fabrications that fit their far-left Anti-American narratives. You can agree or disagree with their editorial position of being a far-left propaganda pamphlet, just don't try to deny that's what they have become when the evidence of their bias is so blatantly overwhelming.

Here's some examples of their bias: Atlantic : 17 items

Smart guns are a dumb idea -

"Smart guns" (sometimes called safe guns) were an idea invented by gun controllers to have a wedge issue to divide the nation. But there's nothing smart about them. Anyone with a basic clue of them, would laugh openly, if they weren't so fucking dangerous. But the whole issue is evidence of why we should tests to qualify people on topics, before allowing them to vote. How I became a Police Abolitionist - The problem isn't just that the Atlantic posts divisive FakeNews that undermines our social cohesiveness, it's that when caught in it, they don't correct it and fire everyone involved. The Atlantic fires some of the best journalists if they happen to have once written a pro-life opinion piece... but someone caught red-handed writing pieces of unverifiable fiction that claims the police murder innocents with impunity, like this article by Derecka Purnell? And the Atlantic refuses to respond to evidence showing how negligent they were in fact checking, and how dishonest this article's premise is, because that's what The Atlantic has become. Hillary Clinton: Vandals -

While some partisan sources (FakeNews like Atlantic, FactCheck) will try to spin it as minor “pranks”, reflecting the Clinton Administration’s classlessness, the GAO’s admits that they did $13-14K in widespread vandalism to the WhiteHouse: glue desk drawers shut, profane signs, graffiti and insults on voice mail, destroying 62 computer keyboards and 26 cell phones, massive cleaning bills and stealing or breaking doorknobs, medallions, office signs and the large presidential seal. Of course when the allegations went public, the Democrats tried to spin it that it wasn't THAT bad, and it was tacky of the Republicans to whine about it and make felonious destruction of public property look like anything bad? Atlantic on Seleimani - Just to demonstrate what a complete anti-American rag that the Atlantic is, here they are trolling to find some far-left anti-American far left law professor talking head to ignore the thousands of people Obama drone bombed, and complain that Trump killed one, with far more justification -- and thus he was wrong not to get congressional approval first. At least if the speculation bad the far left NYT was true, and since they'd made hundreds of mistakes about Trump, that's not likely. AR-15 Bullets -

2019.03.22 Mueller Report - The Mueller Report is out. I don't care if you like/dislike President Trump, I care whether people will defend the truth or perpetuate a lie. Soon we will be able to read the full report, but the summary is a smackdown: (a) there was no hint at collusion by Trump or his team, in fact they rebuffed attempts by the Russians. (b) without collusion there couldn't have been obstruction, but even if there had been, Trump wasn't close to obstruction (c) the media narrative has been a fraud (d) the media wasted 2,284 minutes, and 533,074 articles (245 million responses) to coverage of the fake narrative. The media doesn't admit their mistake and apologize to Trump and the public are not journalists following the facts, but polemics mad that someone shined the light of truth on their deception. And right on cue, a bunch of FakeNews, Democrat politicians, and Hollywood sheep try to spin this as it, "stops short of exonerating on obstruction", or shifting the narrative to Mueller's competence, Trump's guilt on something else, or anything other than their 2-year fraud. But all the outlets that championed it as the end of Trump, or shown for frauds. Expecially when they won't just apologize. 2019.02.06 Assassination "Joke" - Jemele Hill (of ESPN and the Atlantic) made a tweet (now deleted) saying AOC should interrupt Trump's next State of the Union address, with the following quote, "GETCHO HAND OUT MY POCKET". This was what one of Malcom-X's killers said before murdering him. Jemele deleted the tweet and apologized, but few believe it was a joke. 2018.10.03 Cruelty is the point - If you want an example of the blatant partisan bias (and the stupidity) of the The Atlantic, this article, "'The Cruelty Is the Point: President Trump and his supporters find community by rejoicing in the suffering of those they hate and fear'" is a perfect example. The fact that a staff writer could submit this without being immediately fired, let alone that it would be published, ends any pretense as a credible publication. This attack on Trump on their supporters is devoid of historical accuracy and does what it accuses the other side of: demonizes the opposition. Can you ever imagine them running the corollary about how we know that minimum wage, sensationalize racial divisions, or calling the other side bad names shuts down progress and polarizes us, so the left does it because they are vicious assholes? If you can't, then it proves my point that the Atlantic is not a serious publication, but a hate pamphlet for the DNC. 2017.05.25 NATO - Trump criticized NATO (as he has during his campaign) for bearing the brunt of NATO costs (true), and intimidates them into living up to their obligations and coming up with more money. The leftists, their Press and their fact checkers all pretend this is end of days and proof that: 2016.11.01 Greenville, Mississippi black church fire - Right before the election, a Greenville, Mississippi church (Hopewell Missionary Baptist Church) was set on fire and spray painted with the words “Vote Trump”, by Andrew McClinton. Of course all the leftist FakeNews outlets (Atlantic, NYT, CNN, SPLC) ran sensational headlines about how bad Trump and his white supremacist supporters were to foster such hate. Only it came out later that it was done by one of the churches black congregants, who hated Trump and it was a false flag effort. Many quietly updated their story, or ran a retraction a month after the damage had been done. SPLC left it on their hate map to mislead the public about how bad the problem is. 2014.06.12 Hillary not left enough for the Atlantic - In "Comparing Hillary Clinton to Russ Feingold, Whose Record Is Better?" the Atlantic would think that Hillary's problem is that she's not left wing enough for the Dems. And in a way they're right, she's an old and incompetent opportunist, that was too unethical for the Watergate Investigation -- but is now in the middle of the Democrat Party? That says something. It's something sad, but it's something. To borrow the key quote (from a friend), "Democrats can tell themselves it's inevitable that their nominee will be a Patriot Act-supporting, mass-surveillance-enabling hawk who opposed gay marriage throughout the years when it mattered most, still favors the death penalty, and would re-enter the White House having cozied up particularly close to Big Finance. That doesn't say much for their party."

The reason for the firing was elucidated in the memo: his views on abortion (which the editorial staff was aware of before they hired him), was that of science: and that a fetus is a human life. His beliefs were of the side that killing a fetus was tantamount to murder (and that abortionists should be punished accordingly): a view far to the right of my own. That view is no more morally offensive than the other extreme that says full term abortions of viable babies is nothing but eliminating bio-waste. That latter is the view which plenty of staffers at the Atlantic hold, including Jessica Valenti, who also writes for the Washington Post, and The Guardian US, without any concerns of retribution.

For his callous and violent remarks (that abortionists should be punished), made years before the hiring, Gates claimed that Kevin Williamson needed to be let go. While the Atlantic has no problems paying the salary of Ta-Nehisi Coates, who compared a police officer who shot a Howard University student to the 9/11 terror attacks, or when contemplating income inequality between Blacks and Whites in America he opined longingly that such corrections "don’t tend to happen peacefully". And in response to riots in Ferguson he defended the violence with, “What clearly cannot be said is that violence and nonviolence are tools, and that violence—like nonviolence—sometimes works.” He sounds frighteningly identical to the same things that the Alt-Right (Richard Spencer) claims, but since it's from an alt-left view, the Atlantic doesn't want to condemn or fire, they want to ponder the intellectual nuances of the charges.

So the hypocrisy of tolerating one extreme, while being intolerant of the other, is something that Gates (editor) lost sight of. Or just never really cared about.

Kevin got the opportunity to do what he should have been able to do at the Atlantic before his firing: he wrong a column expressing what his actual views are (instead of snippets out of context). Nothing in this, seems to be worthy of getting let go. But the Atlantic has differing standards based on political leanings.

I learned that while the Atlantic’s founding motto was, “Of no party or clique”, that dream is long dead. We also learn that anywhere that progressives get a voice, they will ruin it for others. They have the tolerance of complete intolerance: there is no party or clique at the Atlantic, because like California, Nazi Germany, or anywhere else the progressives rule, they demand complete and utter subjugation to the will of the collective: thus they are not "of" the clique, they are the clique.