From iGeek
(Redirected from Category:Ben Shapiro)
Jump to: navigation, search 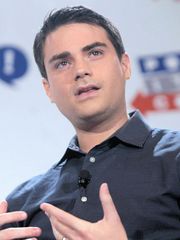 One of the sharpest voices on the right. His family emigrated from Russia, he started writing his first of 7 books at age 17 (How Universities Indoctrinate America's Youth), and became youngest nationally syndicated columnist in the country that same year. A Harvard educated Jewish Lawyer would fit all the stereotypes, if it wasn't for his conservatism and breadth of knowledge and wisdom (e.g. he's not a knee-jerk lefty). He founded and serves as editor-in-chief for The Daily Wire, hosts The Ben Shapiro Show (a daily political podcast and radio show), co-founded the media watchdog group TruthRevolt (no closed). He also travels around the country giving Campus lectures and debates, exposing philosophical and factual flaws in the far-left's positions (like campus culture and SJW). So he is despised and maligned by the far left, because he so intellectually outclasses them (in class, quality of argument, and factual depth). They call him (an Orthodox Jew) a Nazi, and have maligned his reputation amongst the ignorant. But if you actually listen to him, or read his stuff, he has incredible points -- even the things I disagree with him on are very well thought out and reasoned (and I do disagree with him, at least in degrees, on quite a few things: but his arguments are still stellar). And he's been doing it so long, the speed of his wit and depth/breadth of his knowledge on issues is stunning to watch. Whenever I get full of myself, I just want a Q&A with him, and it puts me back in my place.

Because of his conservative views, and once working for Brietbart, he's often called a Nazi or alt-right. (To the ignorant, those are the same thing). Actually, he is the anti-Alt-Right: mature and restrained. Shapiro was also a bit never Trump (before the election), now is not a Trump supporter -- but willing to begrudgingly give him credit. (His dislike of Trump's style seeps into some of Shapiro's stuff and comes across as sounding a little too lefty or apologetic). Which sets off the alt-right (who are generally fans because of Trump's style to give back to the left, the same shit the left does to the right). So while there's a few views they align on (like their contempt of SJW's, Radical Feminism, etc), the alt-right doesn't like him at all: he's way too straight-laced, religious and civil -- and they are meme-throwing kids mostly mocking the system (originally), along with some alienated adults with white-separatist or nationalist tendencies (more so now), and a few real bad eggs amongst them (that the media plays off as the whole movement). But the media would have called Mitt Romney alt-right, if that term had been around when he ran for President. But to the alt-right, Shapiro is a 'cuck', 'pussy' and 'kike'. And anyone that says Shapiro is alt-right or a Nazi can be marked as a useless human being (around issues that touch politics or current events).

But if you want to see real venom, you don't have to look at the occasional anti-semite in the alt-right, you can look at the mainstream left, like Joshua Topolsky.

Christina Sommers (Factual Feminist) retorted to this tweet by Joshua, asking "Is there a way to delete other people’s tweets?" -- which kind of sums it up. And this tweet is not an anomaly. I've heard NPR refer to Shapiro, Milo, or others as alt-right. But then if the far-left news outlets cared about the truth, I'd have nothing to complain about. Fortunately, I can complain about Twitter-Hypocrisy. Twitter would delete the account of any conservative who retweeted anything 1/10th that offensive in a nanosecond (no second chances). But since it was an attack against one of the more moderate voices on the right, by a guy that was involved in far-left sites like Vox, the account is still up there. (Though he did delete the tweet: no apology).