From iGeek
(Redirected from Category:Religion)
Jump to: navigation, search

Religion is a mirror on out soul, it tells others who we are, and what we believe.

I've studied a lot of world religions, and have interest in many of them. I went to private schools up until the 3rd grade, and later went to Sunday school and a religious University. I had a friend that became a priest, and a few other people I've known who were pastors, religious or philosophical scholars. I've read the Bible a few times, (old and new testament), and have read other religious texts; scanned the book of Mormon, read many Asian philosophical teachings, and so on. (I really want to read the Koran). I find religion (people's beliefs) fascinating. That being said, I've been asked at various times about my religion. I'm an Atheist.

There's an old saying, that you need to be open minded, but not so open minded that your brains fall out. So the trick is to listen, read, learn and make the best decisions you can, based on the information at hand, and keep studying and learning to see if you can make a better decision, or if more facts can change your mind. But I'm still a fact-based and hyper logical person. And with that in mind, there just is not enough evidence (or any evidence) to support the concept of a God. And what there is to support the concept of a God, supports the concept of multiple Gods, or a God that is quite different than the Christian God.

I'm not a fanatic, that believes in being rude to others about their beliefs. I don't think people that believe in God(s) are fools, or bad people. My brother is religious, and I love him, and have no problems with him praying for me, nor do I want to ìeducateî him, or make him follow my world-view, any more than I fit into his. I still will go to Church for various occasions, and take no offense at listening to sermons or others trying to teach me the happiness that they have in their lives (as long as they are not offended at me doing the same). Many pious people (Priests, Rabbi's, Pastors and holy men) are fascinating and well educated, and I love discussing their religions with them and learning more about their views of history and their religious relics, rituals and texts.

I don't understand why people would want to prevent prayer in school (meaning a moment of silence where any denomination can pray to their God(s), and others can meditate), nor why people want to take ìin God we trustî, or ìunder Godî out of America. Don't sweat the little things; and show some tolerance for others beliefs. If they aren't saying which God, it is not a violation of church and state to me. And tolerance needs to be learned by all religions, even the religion of no religion. I do want to prevent the slippery slope of a state controlled religion; but I don't think a non-denominational moment of silence violates that in any way.

But I do have many strong beliefs; and many are based on more information and a better understanding of religions than many that practice their own religions. But either way, I just write to express my views; and coincidentally, that often aligns with some others, or at least helps others to understand an alternate view.

Here are my views on religion.

History of the world... 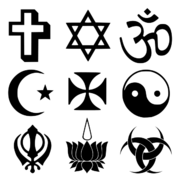 You can go to any culture around the world, and they will create a religion. They even have similarities in stories. But you need to look at it from a sociologically or anthropological view. What motivates the people and the religion? There are reasons for all the stories creations, and it isn't that hard to figure out.

Why is there the history of the flood? Easy, if you look around, almost anywhere in the world, it has been under water at one time, and if you dig, you can find shells, fossils and bones. The priests need to explain why; so they make up a story about a flood, which seems to make sense. Now why did the flood happen? That's easy, the priests just explain it off as people not following the priest's teachings; so you better listen to them (and tithe properly and so on). Gods coincidentally, support the religions of the priests.

Why is there a heaven and hell (or reincarnation/afterlife)? Easy, if you look around, people want justice. Since there often isn't justice on this earth, and too much efforts at getting it (personally) would lead to anarchy, so there needs to be payback and reward in the ìnext lifeî to mollify and motivate people to do the right thing (or not do the wrong thing) in this one.

Why is there an afterlife (or something after death)? Because it is easier to face death if you don't have to face the truth that things just end. I don't want to stop being, and I don't think anyone does. So stories about mansions, palaces, or many virgins at my disposal for leading a Godly life, seem to be pretty nice platitudes playing to my weaknesses. And all it takes is me giving up free will and part of my income to the church.

All the stories and religions are built around a few things; rituals to reinforce the religion, rituals to empower the church or its leaders, platitudes to make people feel better (and want to stay in the religion), clique type peer pressure and social rewards for belonging, threats for those who don't follow the rules, and so on. Churches and religions are about power, and mind control. In fact, most of the things that people claim are ìcultsî and ìbrainwashingî techniques are used by every religion. Brain washing is a pretty simple process, and if you want to learn about it, just study any religion. Some of these techniques include;

That doesn't mean that the power and mind control are all used for bad, or that churches are bad. Churches, like any government, are highly mixed in deeds. But that is all religions are, organized little governments that are built around a common belief system. Not highly different from our other forms of government. And their actions are some of the best examples of ìhow to brainwashî someone that we have. Even surpassing our school system. 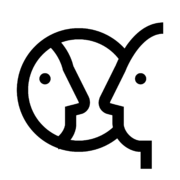 There is no doubt that mankind has a need for answers and belonging. There is no doubt that religion fulfills both of those for some. There is no doubt that men can be brainwashed and programmed. I call us "wetware", like software or hardware. We can program ourselves, and frankly it isn't that hard, and the techniques are well known. Many or most of these techniques have been used first and foremost by the religions of the world. So the only question left is that despite the fact that religions are about brainwashing, and playing to man's needs, all for their own personal and organizational gain, are they right or wrong? It is still possible that despite skewed methods, or the moral extortion, and so on, that the priests and the religion is still right. And that the church itself is a test of faith, against all reason and evidence to the contrary. But I'm not one that has that kind of faith.

I do believe that there is something to be learned from all religions. All of their stories, rites and rituals, have a purpose. And I can learn from those. And ultimately I don't think needing and belonging are bad things. And I do see the good that religions have done historically, as well as the bad. But religions have reflected mankind, not a higher being, in the most important area of all; their deeds. Religions have been used to start wars, torture people, mislead people, extort and exploit people, and to take power and money from some people and give it to others. It has also been used to build community, do great acts of charity and compassion, great acts of kindness and forgiveness, or helped people grow and live better lives. So it is a tool that has been abused, as well as being used for good. It is a dangerous tool, that must be respected, and learned from.

Religions to me are best as a tool to learn about people. They are a Rorschach inkblot of people's souls. If you want to understand someone, ask about his or her God or his or her belief. I've heard many that say their God is merciful, but then talk about how all the non-chosen will roast in hell for all eternity; which reflects true intentions. Others have said, "my God would not punish group X for not knowing him, but I will do my best to help them and others know my God"; that to me is a true merciful God to worship, and a truly merciful person.

So you can learn a lot about people based on the God they choose to worship, and based on what people believe.