From iGeek
(Redirected from Category:Statuary Rape)
Jump to: navigation, search 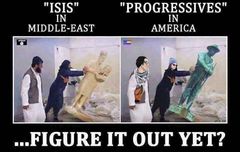 There is no "hate speech" exclusion for the first amendment (1A). Destroying public property (vandalism) because it "offends you", is no exception. And if you start destroying others tributes, then why should any be allowed? Before you grease any slippery slope, you might be wise to ask, "what's at the bottom?"

The recent example was about Robert E. Lee, if you ignore all the other things the liberals have tried to ban in the past (from Washington Redskins, to mascots and so on).

I only wish this was unfairly taking one incident out of context, but it's one of hundreds, and a milder one. (This wasn't a liberal professors smashing people over the head with bike-locks, because he disagreed with them, or the dozens of other examples). The problem is you can't reason with SJW's once they're sure of something. And they are sure of everything, long before they studied the topic. They just know what they should be triggered by, especially when they have no clue on what they're talking about. 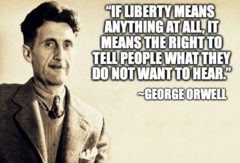 Democrats don't really care about this stuff, or they'd complain about people on both sides. They just want to use the ignorance of their base as a tool to teach people to reflexively hate (and react violently and destructively) against whomever or whatever they're told to hate. 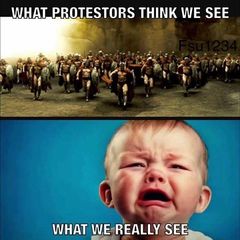 But while these things generate a lot of attention and churn in the short term, Democrats have lost most statehouses and major elections in the long term. Other than on the coasts and those that watch CNN, most of the nation just can't be duped (for long). The truth leaks out, and the rational realize how irrational and uneducated the DNC and media that celebrates their acts of intolerance, really is.

Ban all the things 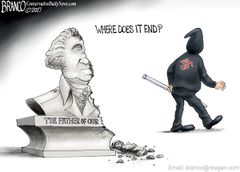 Like most toxic things the progressives "gave us", their divisive demands for tolerance (by attacking everything they didn't like), seeks only to tear down, and rarely to create (unless creating paves over others sacred places). Their attacks on Confederate Statues is a small example that lead exactly where most warned, and the progressives ignored.

They were mocked... at first. But their warnings were taken as suggestions.

Of course glorifying slavery is bad. But if it was about slavery, then their idols must fall too. Should we not then tear down the Pyramids? How about the IRS building? No not THAT!

But they can use their game of guilt by association to destroy everything that offends them (and everything offends them). No Castle in Europe, no Church, no book or document (look at what they did to Mark Twain). If you allow them that tool, they're only limited by their imaginations:

The only thing that will remain sacrosanct is their One True Religion (The Progressive State, and it's iconography). Totalitarian ideology goes under the banner, "Join or Die" -- progressivism is totalitarian, just with a better PR campaign.

This is where the slippery slope goes weeeee.... the backlash gets it's stride.

If the democrats care about Slavery and horrible people being celebrated, then there's going to be a party while we remove the names of the DNC leaders/idols that gave us Slavery, Indian Extermination, the KKK, and Nazi Eugenics. But Margaret Sanger would be a great start.

There's far more justification for removing Sanger, than Robert E. Lee, for those who know history. Lee gave up his slaves (before the war) and said "slavery as an institution, is a moral & political evil in any Country". He didn't fight for slavery, since Lincoln offered the Corwin Amendment to guarantee slavery if the South came back. They refused.

On the other hand, it was the American Eugenics that inspired the Nazi's to copy the Americans (and then some). And Hillary's idol, Margaret Sanger of Planned Parenthood was one of the vocal and enthusiastic Eugenicists (who corresponded with Adolf) and besides calling lesser races weeds, had quotes like the following, “We do not want word to go out that we want to exterminate the Negro population,” as she was recruiting a pastor to help her side do exactly that.

(NOTE: While I'm pro-choice, it's for completely different reasons than Sanger.)

So let's say that Racism, Slavery and Gennoacide is bad (because they are), so everyone who ever participated in it should never have a temple or monument in their name (we should strike their history from the record, like we're Stalin). So what about Moses? (Lookup the Amalekites). Moses was by all accounts successful in his genocidal campaign against them, and they no longer exist.

So how can you have freedom of religion, and strike Moses and the Torah from the record, since both celebrate that event? So you're either an antisemite, or you have to tolerate it for the Jews. And if you do for them, then you're a hypocrite to attack anyone else's idols, just because you don't like everything they did. (Of course recognizing their hypocrisy isn't a strong suit of the left, which is why we have to remind them of it). 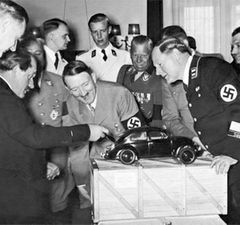 If destroying all things tied to something bad is right, then I expect all lefties to burn their VW's (and BMW's). Or they're hypocrites with double standards: pick one.

But of course, this isn't about what the left is complaining about, this is always a test to see how compliant/gullible/teachable the public is. Are they willing to follow without question or thinking? If so, they're good Democrats. If not, they're bad people.